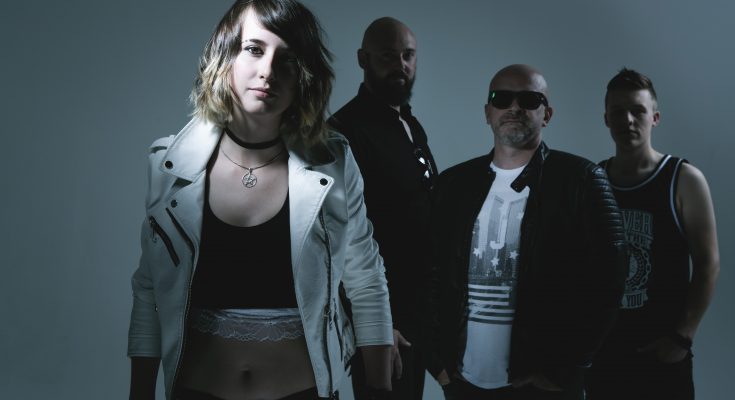 Since one of the top bands of the Belgian metal scene was about to release a brand new album called ‘Renaissance Noire’, we fired off a couple of questions towards Spoil Engine and received the following answers by vocalist Iris Goessens:

GRIMM: Hi! Thanks for doing this. You’re in the last stretch before the release of “Renaissance Noire”, how is it going and how hard have you been looking forward to the release?

Thanks for having us! It’s going great. Spoil Engine is ready for shows in 2020. The release show was great and we received lots of positive comments and reviews on Renaissance Noire. So we could not be happier at this point!

GRIMM: How has it been recording “Renaissance Noire”?

We recorded everything ourselves at local and home studio’s. We took our time for this one… With Stormsleeper there was a pressure to create an album asap. This time we didn’t have that pressure. The mix is done by Henrik Udd in Sweden. He also did the previous album and bands like BMTH, Architects etc.

GRIMM: The band has been around for about 15 years and even the present line-up has been consistent for a while. Has writing and recording new material become easier or are there still major struggles to overcome?

GRIMM: You’ve always had a knack for writing songs that would easily serve for massive shout-along moments at live shows, but on this album it comes across as if most songs could cause that. Did that come naturally or were you aiming a little bit for that kind of thing a bit more than before?

This came quite naturally. We do keep our live show in mind most of the time when we write. But it’s not the main focus.

For me personally this is Golden Cage. My favourite song on the album.

GRIMM: This year seems to be a good year for bands that manage to combine heaviness, groove and melody into an interesting sound by mixing elements from different genres, seeing that a bunch of them are quite a bit on the rise. Do you think or hope that “Renaissance Noire” could mean a big step forward for Spoil Engine?

We hope so! We take every chance to grow as a band.

GRIMM: On “The Hallow” you have a guest appearance from Jeff “Carcass” Walker, that’s not the smallest of names within the metal scene. How did that come to be?

Jeff was recording some stuff for Carcass AK’s studio. AK is the sound engineer for Carcass and Slayer, but when he’s in Belgium he sometimes does our live shows too. He called Gaze if he would like to come to the studio when Jeff was there because he knew that Gaze is a big Carcass fan. Gaze took a demo with him that’s now The Hallow. Jeff loved it immediately and was down to do some lines on it. That’s basically how it happened.

GRIMM: If you could choose anyone to work with or have as a guest on one of the Spoil Engine tracks, who would be an absolute dream come true?

A big name outside the metal scene. Like.. Ozzy Osbourne is now on a track with Post Malone. Stuff like this doesn’t happen often so I would love to do a cross-genre collab.

GRIMM: Last time you’ve done an extensive tour through Europe and even had a stint in Asia (which was awesome if I look at the footage). For the touring spell that is coming up (I assume), are you aiming or trying to bring Spoil Engine to new corners of the world?

We will focus on Europe first and if we get the chance to go back to Asia again that would be great. You never know!

GRIMM: Any final message you’d like to send to your fans, our readers and people that have to discover you still?

Go give Renaissance Noire a spin! If you like it we would love to meet you all on the road.

GRIMM: Thank you for the talk and good luck with what comes your way in 2020!

Check out our review of ‘Renaissance Noire’ here and check out the album itself right here: