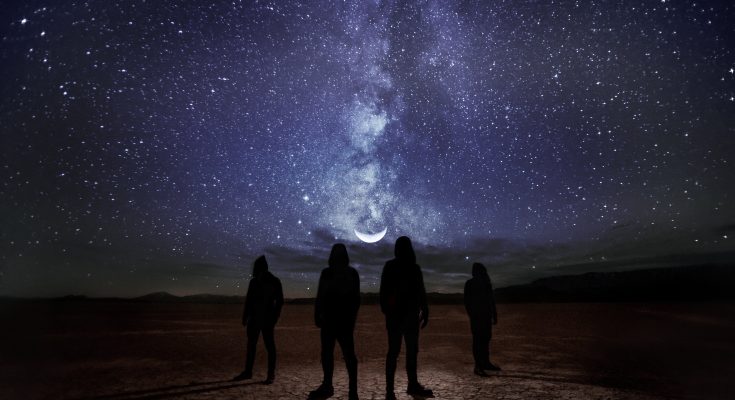 GRIMM: Aren’t you guys tired of being compared to Mgla or Dissection? That might have been partially true on the debut, but the comparison seems to linger in many reviews. Maybe this record will finally release you from this?

You know, I take both as a compliment as they’re both great bands but I do think we are different in many ways. The Mgla thing I think has especially gotten out of hand and seems like an echo chamber at this point. I can see why people see a few similarities here and there, same for Dissection, but Uada is much different than both bands I think. There are a lot of different elements and influences in our arsenal and songwriting. I’ve seen a lot of people compare us to other bands as well, so I assume it’s just a way of describing our sound the best they can.

GRIMM: The cover is once again designed by the fantastic Kris Verwimp. How has it been working with him? Do you give him detailed instructions on what you have in mind or do you give him free rein with just the album/title?

Kris and I have been working together now for over 16 years on various projects. He has been a favorite artist of mine since discovering him back in the 90s through album covers of various black metal acts like Absu, Marduk, Enthroned, Moonblood and so on. His work always had a way of transporting me into different worlds. I wanted that for my own albums in hopes that it would inspire others as it has inspired me.

When I’m putting together an album, I always have an idea or a vision of what I’d like to convey in the artwork. So, I do usually write Kris with an idea that I have with as much detail as possible. He’s really great at taking the idea and exceeding expectations. One of my favorite things is getting to see a new work of art come into reality. It’s a very very exciting and special thing for me.

GRIMM: Anything in particular you want to share with the fans still before we conclude this interview?

I’d like to take a moment to just say thanks to all that have supported us over the years and continue to do so in this journey. Unfortunately we are unable to connect in the flesh due to the pandemic but we hope we will be able to return to the stage soon and see you all somewhere out there in the world. Until then, stay haunted!

In case you missed it, go check out our review of Uada‘s ‘Djinn‘ here.