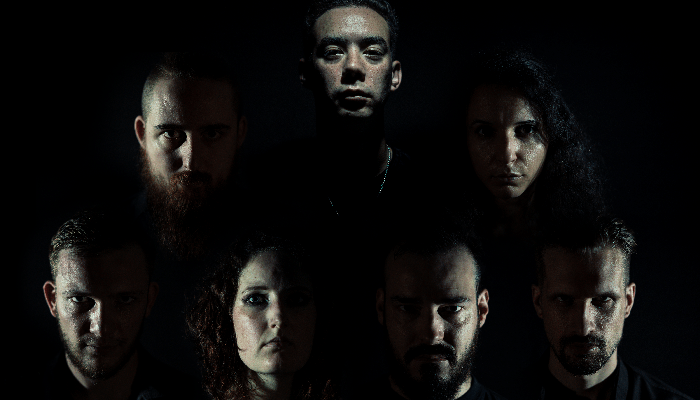 Symphonic death metal outfit InHuman is a brand new element in the Belgian metal scene. Or well, not that new since the band is a completely revamped version and formerly known as Anwynn. For the occasion of the release of the first album by this incarnation of the band, we were able to talk with Astrid (Keyboard) to hear all about it…

GRIMM: Hi Astrid, how are you?

Good! Quite excited about the release that happened. It was released last Friday (February 26, 2021) and the responses have been really good.

GRIMM: I was going to start with congratulations on the new album, because it is really good!  The more I listen to it, the better it gets!

Oh! Thank you, I’m glad you like it. That’s really a compliment, I think of it as my favorite album so it’s very nice to hear.

GRIMM: It’s actually much better than Anwynn! Do you realize there’s no way back now?

GRIMM: Okay, cool! Well, you got a new style now, and a new name… Have you been thinking about that for a while or did it just come naturally?

It’s been progressive. For many years, not necessarily the name change but the fact that the general style, music, visuals, themes and just general vibe was changing and we’re finding ourselves and what we really want to do with music.

Based on this album, which we have started writing a long time ago, I guess the last step really, the last natural step was to change the name, it wasn’t something out of the blue, and then when we did finally decide to do it, it was like: ‘yeah okay it makes sense’. A lot of people that are currently in the band now don’t relate to what Anwynn did which makes sense because they weren’t in the band at the time, or even if they were, we were doing something very different. And so we ended up changing the name but it was a long time coming, I think.

GRIMM: You’ve been working on this for about five years actually since the first writings?

GRIMM: You changed in the last years, your grew into this, you got to discover new stuff… For the next album, will you be able to do something like this right away? You’re like, totally in this level already or are you a little scared?

I honestly have no idea. I’ve been asking myself that same question. I’ve been considering starting to write the next album but we weren’t there yet. This album was a very big problem to put out because of obvious reasons,  because of the corona circumstances, so it was a very big deal… we dropped it for like six months and we came back to it. And so all of our heads were really taken off with the release of this album and we decided not to start working on the next one yet.

So I don’t know,  but the question you’re asking me: I’ve been asking myself that…

I’m looking forward to see, probably soon, how to answer that question but as for now I don’t know, I think it’ll go more smoothly because we do have much more of an idea of what we want to do, because we’re very happy about this sound and we do want to continue in that direction so I think it will go smoother, but obviously we also hope to make something, you know, not as predictable, because we already did that.

GRIMM: You’re thinking about starting with the next one right away? Because… right now you didn’t get a chance yet to perform this album live…

We absolutely want to perform this album live… We want to have a release party also. We would like to tour, we would, you know, all of those things that seem abstract now. But yes, we would very much like to play live.

GRIMM: And then of course, if it will take the same amount of time, you still have time to do this album live.

Yeah. And even if even if it doesn’t, I mean even if we do start writing the next album soon, it’s not gonna stop us from playing this one. We really… we’ve been wanting to play this album for… way before it came out, way before it was completely recorded so yeah, we’re gonna play!