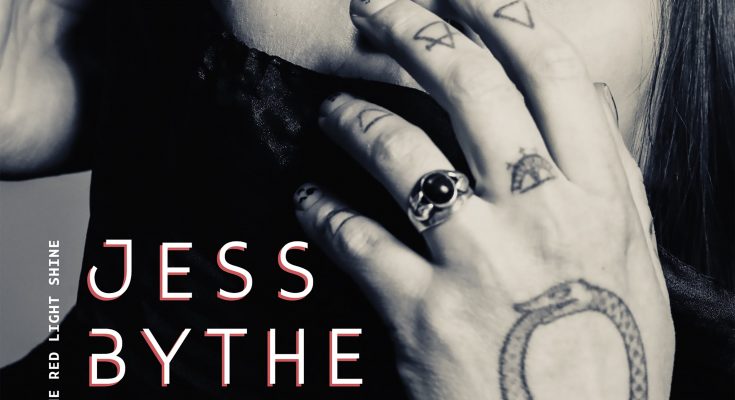 Jasmin Saarela, the enigmatic singer who fronts the Finnish silver machine called Jess & The Ancient Ones has produced her first solo record.
Rather than using her real name, she once again went with her artistic pseudonym in a new variation: Jess By the Lake.

By her own words the moniker was chosen as she has lived by a lake for most of her life, which is of course not that uncommon in a country nicknamed the Land of the Thousand Lakes.

This is not the first time Jess has tried to spread her wings, 2015 saw the rise of The Exploding Eyes Orchestra, a side project that involved most of her Ancient colleagues. It showcased a bluesy classic rock collective that proved to be a creative outlet for tunes that did not fit in the regular format. It produced 2 albums worth of excellent material, conveniently called ‘I’ and ‘II’, before attention turned elsewhere.

‘Under the Red Light Shine’ is in a way a successor to that. It will sound both familiar to fans of her other outfit while at the same time re-exploring the bluesier, soulful grounds as well.

The songs still have that flower power vintage vibe as if Svart Records simply unearthed a fifty year old tape from a dusty basement in a long forgotten recording studio.

With The Ancient Ones, Jess usually rocks out a lot more while the songs by the lake are less psychedelic and a tab ore bluesy and introverted. More Janis Joplin than Jefferson Airplane if you will. Coupled with a deeply rooted melancholic romanticism, it is inherently Finnish record. Just think of Hexvessel, for instance.

Even more than normal, Jasmin imbues the songs with a lot of soul, which is where the reference to Joplin comes to mind once more. It is her exceptional voice that really brings these songs to life. Even though the songwriting out with Timo, she opted not to go with her brothers in arms this time, but rather form a wholly new group with some friends from school.

Jasmin may unmistakenly be one of the driving creative forces behind both projects, they have enough individuality between the two of them to guarantee their own lifespans. Hopefully we will get to hear much more of both of them.