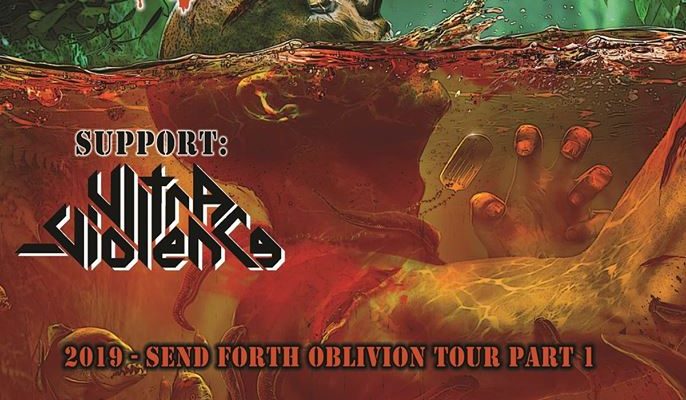 There are many bands who have been around for forever and still remain somewhat stuck in the underground. Sure, they get to tour with the big ones and get some mainstream exposure. Yet somehow they never end up breaking through, despite their killer sound. You don’t hear me complain. As a fan of the underground and local talent, I love to get treated to top-shelf quality every now and then. But once in a while I admit that I wonder what the band in question is still doing playing bars and shitty backwater venues. Jungle Rot is such a band. A few weeks ago they embarked on their two-part ‘Send Forth Oblivion Tour‘ across Europe and graced us with a stop at Brussels’ Magasin 4, coincidentally one of my favorite venues.

Unfortunately (well, yes and no), I could not attend the opening show from French deathgrind ensemble Balance of Terror because I was interviewing Jungle Rot‘s vocalist at that moment. I did however get some good feedback from my friends in the audience. Damn! Better luck next time…

Italian thrashers Ultra Violence bear their name well. Kicking off with an intro sampled directly from the movie ‘A Clockwork Orange’ in typical social commentary thrash metal fashion, I immediately knew we were in for a treat. Flying straight to your face from the stage are groovy riffs and skank beats intertwined with soaring solos. While I’m not a fan of the overuse of blast beats, especially in genres where they are not commonly used, Ultra Violence manages to throw in a couple which after all aren’t too odd-sounding. Tracks like ‘Welcome to the Freakshow’ and ‘The Checkered Sun’ make it impossible to keep still. The tempo is mostly kept high, although the music isn’t shy on groovy breakdowns. Keeping the best for last, our Italian friends here ended their set with a literal bang as they closed it off with a breakdown which suddenly exploded in a crossover beat. Although the audience was not biting at the show’s start, the mosh pits towards the end were testament to its incremental quality.

Wisconsin’s Jungle Rot have been around for nearly twenty-five years and they’re not showing any signs of wanting to quit. The death groove masters have finally come to Brussels to kick our asses. And kick ass they did. This band is pretty amazing by my book. They mix a ton of influences from the many different metal subgenres, but they do is so well the result becomes its own thing. Indeed, you can distinguish the various influences from death metal, thrash metal, black metal, hardcore and heavy metal but not to the point where the exercice is too tasking for you to stay invested in the music as a whole.

The show itself was a blast. The crowd dug it from the get go. Since Jungle Rot has such an extensive discography, and because they released their tenth full length album last year, the set list they brought was extremely varied. New and old songs intertwined so as to please the older and the younger generations. They kept this pattern until the very end when they treated us to two encores of 2001’s ‘Circle of Death’ and ‘Fearmonger’ from 2018’s self-titled album.

Now that was a fun way to end the week. Nothing better than some good old death metal to get you prepared for Monday. Just a heads up: Jungle Rot will be playing European Festivals this Summer. I intend to be among the crowd at Brutal Assault and catch Jungle Rot again. Pun intended.