Home Death Metal Just Before Dawn – An Army At Dawn 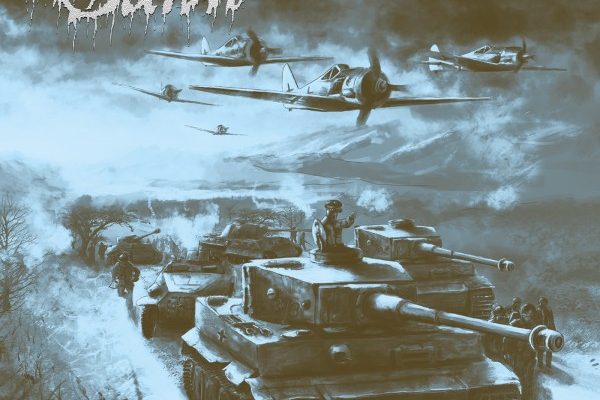 Swedish death metal act Just Before Dawn is one of the few death metal bands whose music is focused on themes of war. Since 2012, this project band released three studio albums and now they return with their fourth studio album titled “An Army At Dawn”. Formed by bassist/guitarist Anders Biazzi (Gods Forsaken, ex-Amon Amarth) JBD takes a big step and delivers an elite level of musicianship. The traditional strike of old school death metal this time, is based on superb guitar arrangements. There aren’t many familiar bands today like Bolt Thrower or Hail of Bullets that apply these warfare subjects to the music. This somehow gives the band an advantage to fill the void. JBD‘s songwriting feels well-structured and detailed with catchy riffs. The fourth album also features many guest vocalists. Almost on each of the ten tracks of the album, JBD introduces a session vocalist, while Anders Biazzi and his fellow mate Gustav Myrin (guitars) have been among the lineup. The newest album brings Jon Rudin (Wombbath) on drums.

The opening intro and track “Paths of Armor / To The Last Tiger” unleash crushing riffs with the lead guitars pouring melodies into the composition. The fierce, epic, and melodic framework adds a notable quality to the music, hence the entire arsenals engage in total destruction. From the beginning of this massive album, JBD sets a metallic tone while the drums capture the intensity. You can hear some measurable amount of double bass. The atonal riffs drive the songs, and this is exactly what the band aims to deliver on their newest album. JBD has also enlisted several guest vocalists such as Matias Nastolin of Decaying, Jonny Pettersson of Wombbath, Damien Terry of Envig, and plenty of other famous vocalists.
“An Army At Dawn” delivers a concentrated barrage of hellfire, despite the number of guest vocalists, the music never loses its intensity.

Besides the uncompromising ferocity, the guitars focus on catchy melodies. It’s safe to say that JBD has crafted its own style. Being inspired by other acts such as Bolt Thrower and Asphyx, the band demonstrates a high degree of performance. On the other hand, most of the vocal performance is uttered with fury. The tone of the album is superior but at the same time, it does not lack the savagery. “And Army At Dawn” showcases the skills and in this way, several tracks are built on high energetic standards. The fourth track “Goliath Revived” is another great entry. As a result of this collaborative work, JBD delivers an excellent combination of effective elements like the melodies to the music.

The album ranges from mid-paced songs and also bring many challenging aspects when it comes to the technical scale. “An Army At Dawn” includes many heavy tracks such as “Dance of Katyusha”. On this track, the band maintains the strength. Perhaps the most eminent factor is the remarkable use of lead guitar. Overall, JBD has taken a step forward, but one thing that bothered me is the overuse of the same formula. All these elements feel very identical to the band’s previous effort. The intensity also changes from one track to another. However, some of my favorite tracks is “With Everything We Have”, which features David Nilsson (Feral). The vocals here explode in fury and contrasts with the energetic performance of the drums. The Swedish flavor comes in a combustible set of melodies and the steamroller style of death metal. The immense role of the guest vocalist has obviously added a monumental effect resulting in better song composition.

Anders Biazzi expertly handles the guitars and his riffs are crushing. “The Atlantic Wall” hits massively with the sudden melancholic tone of the guitars and the wretched vocals of Mattias Parkkila (Blood Mortized). The overwhelming melodies conjure up apocalyptic visions of horror and death. JBD has surpassed themselves on the level of songwriting. “An Army At Dawn“ maintains the energy of old school death metal. As few exceptions, there are slight hints of death/doom on some of the tracks thus the album runs best at mid-tempo. JBD on their fourth album brings a similar sound to the previous album “Tides of Blood”, with the same old and new ideas thrown into the mix. Overall this is a high octane album, structured on the experienced formula. Recommend for fans of Bolt Thrower, Dismember, and Asphyx.