Home Black Metal Khaospath – …For The Devil Speaks The Truth 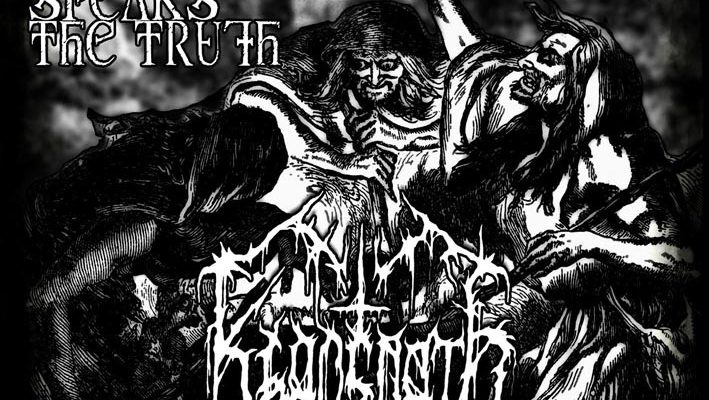 Belgian underground label Immortal Frost Productions has been quite active lately. Next to releasing the debut album of Doedsvangr (review available here) they released the second offering of Sweden’s Khaospath a few months ago. …For The Devil Speaks The Truth is another work of pure blasphemy – exactly as we like it. Active since 2013, their first full length, Synagoga Obscura, was released in 2014. Now we’re presented with the second full length. These guys seem to have no interest in demo’s or EP’s and have only released full lengths so far.

The tone for the album is set immediately by the short, but all-saying intro words:

Fair is foul, and foul is fair
Hover through the fog and filthy air

Indeed, this album sounds foul, foggy and filthy. Khaospath keeps delving deeper into their devotion for the Horned One. Lyrically, the band tells us a story of murder and betrayal, each song representing another chapter of their unholy book. When reading the lyrics thoroughly, they reveal the classic tale of Macbeth by William Shakespeare, in a very twisted way. Whilst following the original plotlines, Khaospath tells the story from a Satanic point of view. They manage to integrate the serpent into the mind of the characters. The lyrics of their songs keep following each other consistently, while the music accompanies the themes perfectly: intense blast beats and shrieks with murderous passages, slower paces and sometimes clean vocals when despair is presented.

Verbis Diaboli (roughly translated as Words Of The Devil) kicks off the album with an extremely aggressive but highly melodic riff, supported by fierce blastbeats. This is a primary example of Swedish black metal, following the footsteps of earlier work from bands like Watain (a comparison with Casus Luciferi is easily made). Next to the raspy, high shrieks, Khaospath also presents us with some spoken word-esque passages. These provide variety throughout the song.

The following 50 minutes of the album continue what Verbis Diaboli initiated, which means uncompromising black metal. Halfway through the album another song stands out: The Stench Of Betrayal. This song depicts the suspicion one landlord had towards Macbeth, following the murder of the king. The foul lyrics, combined with the most furious riffs to be heard on this album, highlight the interaction between music and lyrics that Khaospath created. Next to this, singer and guitarist Hellcommander Vargblod (also known from Draugûl), excrements some of the filthiest shrieks to be heard in the middle of the song.  These screams reek of the pure evil spirit he wishes to convey. This contrasts the almost death metal-esque grunts at the end.

The album ends with a 10-minute long epilogue called The Raven’s Downfall. This is the only song that mostly consists of clean vocals and slow paces, permitting some time to digest the frenzy of the previous 45 minutes. This once more illustrates the wide vocal range the singer has. But just as you’re starting to think the album will slowly fade out, the shrieks come back. Still, the rest of the song is quite slow and the ending solo dies, just like the protagonist in the story, slowly and tragically.

In conclusion: what we have here is a solid piece of Swedish black metal that isn’t the most original thing you’ll hear all day. But the fact that the music and lyrics are so entangled gives the album a lot more value. It’s obvious the band invested a gigantic amount of work to write the lyrics and make them fit with the music itself. This is exactly the biggest strength of …For The Devil Speaks The Truth. This interaction between words and sounds really makes this album worth an hour of your sparse time.