The second album from the German death/black metal Khthoniik Cerviiks has sent series of shockwaves through the underground metal scene of Europe. The trio Okkhulus Siirs (bass, vocals), Khraâl Vri*ïl (guitars, additional vocals) and Gharmonboziia (drums) have achieved an eerie status of sci-fi cult prestige. Three years after the band released their demo outputs in 2013 and 2014, they debuted their first studio album ‘SeroLogiikal Scars (Vertex of Dementiia)‘. Khthoniik Cerviiks was formed in 2013 by members of Ignis Uranium and Zuul. ‘Æequiizoiikum’ offers a genuine take on death/black metal and perhaps this is their best musical revelation since their establishment. The latest material demonstrates a dynamic evolution in sound and the thematic prospect of the band. Each track on the album bends the orthodox structure of blackened metal giving you a glimpse of the stylized methods of Voivod.

The sci-fi intro ‘KC Exhalement 4.0 (Welcome to HAL)’ begins with a transmission frequency and segues into the next track. ‘Odyssey 3000‘ instantly exhibits a maelstrom of dense distorted riffs with the swirling dynamics of the guitars and the drums bursting into momentum. The vocals metamorphose into the bizarre sci-fi domains of space where the mechanical drums rattle like an automated robotic machine. ‘Æequiizoiikum (Mothraiik Rites)’ captures the energetic vibe of early Voivod, the band explores their sonic art of avant-garde black metal without any constraints. The sophomore is based on a concept idea of merging dissonance with tremolos to create a cosmic paranormal environment. While the album may sound very different from the current wave of black metal, Khthoniik Cerviiks‘s music is quite impulsive, fast, and viciously sharp.

‘Δt (Recite the Kriitiikal Mæss)’ combines intensity and ferocity, which gives the band a bizarre quality. The songs are kinetic and meticulously crafted to cross the unusual boundaries of the 21st century’s blackened metal. While the riffs are dominant and commanding, the guitar department is characterized by the remarkable harmonies and melodies that define the sophomore. Khthoniik Cerviiks avoids the modern clichés preferring to stick to their outlandish style and along the way the songs cross the terrestrial plains. The band never ceases to surprise the listener as they continually manipulate the songs at will.

All of the sudden ‘Para-Dog-Son- Demagorgon’ appears to be twisted and effectively aggressive. Khthoniik Cerviiks brings many twists to their sophomore and they have successfully blended many elements into the mix. The sonic quality of the melodies creates a sci-fi background. This is due to the excellent guitar arrangements. Despite the slower tempos the drums are played fast. The guitar tone on ‘Kollektiing Koffiin Naiils (Délire des Négations Sequence 1.0)’ focuses on the jarring dissonance. This track combines the distorted compositions. This kind of technique is implemented to enhance the atmosphere, giving it a noisy cacophonous vibe. Khthoniik Cerviiks often deviates into experimental sections, twisting the melodies and the chord progression. The music expands to cover other musical influences from post-rock to space rock.

One factor that makes the album unique is how the trio blends different ideas. There are elements from jazz to death and black metal. All these augmented elements, including the slow progression on ‘Bloodless Epiiphany “(Délire des Négations Sequence 2.0)‘, proves the complex quality of the music. Even when slowing down the pace, the tempo can change immediately and take an aggressive turn towards velocity. The almost robotic percussion provides speed and intensity in equal measure to the guitars. There also many times where the band binds the melodies to create a bizarre experience only to emphasize the fast tempos. Each of these guitar segments provides many catchy tunes and they contain some impressive hooks and melodies.

‘Æequiizoiikum‘ is an intense robotic foray into the sci-fi realms of the extra-terrestrial. With only six actual tracks Khthoniik Cerviiks are capable to get you all hooked on their outlandish trait. In addition to the superb performance and the sound production of the album, the German trio has unearthed one of the best albums of the year. The prominent exhibition of these experimental methods is shrewdly maintained through the album duration which spins under forty-two minutes. ‘Æequiizoiikum’ was released via Iron Bonehead Productions on July 17, this is highly recommended for fans of Voivod, Sadistik Exekution and Bölzer. 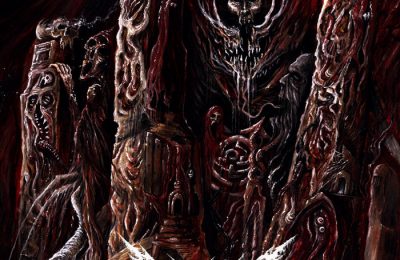