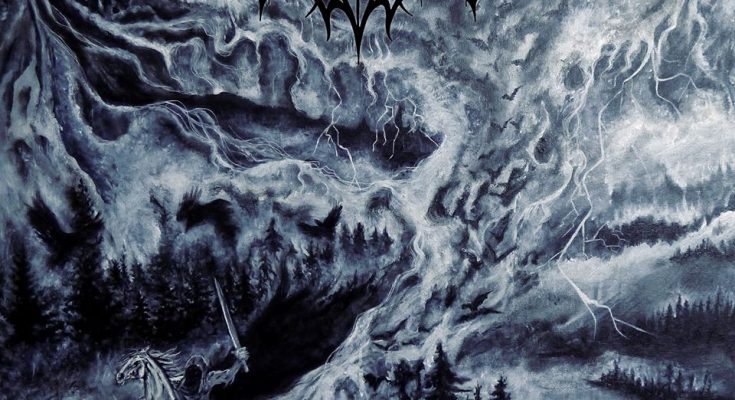 Finland has released some of the highest quality of black metal music in the past and the year 2020 generally has been great for the Suomi bands. Hailing from Turku, Kryptamok is a one-man band formed by Hex Inferi (guitars, vocals, and bass). The sole member has been active in other bands such as Musta Messias, Necromonastery, Scorngrain, etc… The debut album Verisaarna was recently released on May 30th by the prominent German underground label Purity Through Fire. While still rooted in the Scandinavian style of black metal Kryptamok spouted with a promising demo output “Profanni” in 2018. What captured me the most was the hovering synth work on the opening track Loputon, totaalinen sota, and the fast guitar tempos. Seemingly, Kryptamok delivers a raw and blistering paradigm of Finnish black metal, with an album layered with atmospheric synth and pummeling percussion.

Without settling on a certain tempo the sharp barbed-wired riffs are paired with the relentless force of the drums. The atmosphere is topped with a cold icy synth that sweeps across the songs. There is also minimal use of what sounds like a horn, which adds a sense of majesty to the texture. Most of the tracks on Verisaarna have this raw and abrasive sound and the guitars are played at furious tempos. The old school attribute of Finnish black metal is harnessed to provide an evil and malicious feel. The following track Apokalypsin epilooki is delivered in the harsh and primitive style of the Scandinavian black metal.

Hex Inferi has achieved many aspects on the debut. For example the grim and frosty atmosphere is perfectly attained. The riffs on the other hand are vicious while the outburst of blast beats and demonic shrills make the songs sound ominous. The song texture is often layered with synth, but there are also other instruments like cello which are featured on songs like Saastan rekviemi. Kryptamok maintains the flow of the tracks even the melodies are effectively harnessed to provide a misty aura. The tempo is often tackled by sharp aggressive riffs and the drums offer many fast sections. Verisaarna is wrought with various elements that are borrowed from the second wave of black metal.

While the lack of sophistication and refinement here doesn’t ruin the overall sound of the album, the quality production of the album is crystal clear. The songs on the album are straightforward and rife with raw and abrasive riffs but Hex Inferi still creates many catchy melodies. The most conductive part of the debut is the employment of the traditional clichés of black metal.

Hex Inferi proves to be a veteran for his musical work on the debut album deserves your attention immediately. His outstanding performance and the quality of music is brought by professional songwriting. Therefore it’s quite difficult to summarize the album in one word, and among the numerous songs, Rottien reformaatio is yet another engrossing epic track. Beginning with clean guitars, the textural keyboards in the background are paired so well with the tremolo-picked riffs.

Tämä on enne ja kuolema sen lupau is a remarkable track extended to five minutes of sprawling synth work. The atmospheric elements are perfectly layered throughout the track and the vocal shrills and thick tremolos create many dramatic landscapes. Kryptamok‘s Verisaarna is structured on abrasive riffs and pure aggression. The debut is by far among the top releases of the year. It is such an aggressive debut that manifests the evil and the grim superiority of the Scandinavian style of black metal, highly recommended for fans of Gorgoroth and Horna.