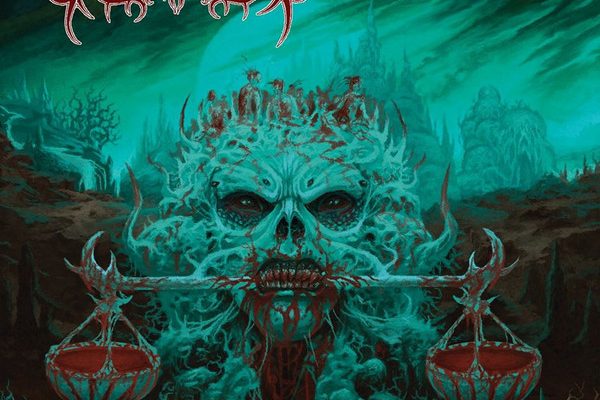 Hailing from Cleveland Ohio, Kurnugia is a five-piece death metal band formed in 2012 by bassist Brian Bergeron and guitarist Larry Kozumplik. After releasing their EP effort “Tribulations of the Abyss” in 2013 they began to find their own musical style that matches the Floridian sound of death metal. The current line-up also includes drummer Chris Dora, guitarist Dylan Gordon and Paul Gorefiend as the vocalist. The quintet plays a brutal style of old school death metal that will remind you of many U.S. death metal bands such as Incantation, Malevolent Creation and even Grave. The overall sound is somehow mixed between the American and the Swedish style and if you are familiar with these bands then rest assured, because the debut album “Forlorn and Forsaken” has many strong and ferocious qualities. With this classic fidelity, Kurnugia doesn’t prefer to take any further risk and this means that musical context isn’t too complex or technical.

Kurnugia presents a a brutal record that takes a straight-forward approach. The album kicks off with the cinematic horror intro “Forlorn and Forsaken” before “To the Cursed Depths” begins with heavy riffage. Kurnugia maintains the tone of the album throughout with well balanced tracks. Across the nine tracks, the guitars launch many fast riffs and solos, while the drumming performance alternates between fast-paced sections and blast beats. Kurnugia offers a wide variety of the nineties old school death metal and I must say the riffs on the album are brutal, catchy and melodic.

Most of the songs have a running time of three to four minutes making them sound relentlessly aggressive. There are plenty of brutal tracks such as “Crown of Suffer” where the guitars drop a fireball of scorching riffs. Next comes another roaring track with “Shroud of Damnation” which begins with heavy rumbling growls. I must say the guttural growls on the album make the songs sound evil and more enjoyable.

With the guitar unleashing vicious riffs, Kurnugia imposes a total annihilation, hence the listener will be overcome with cruel and tyrannical sensation. And on tracks like “Pervert the Pious“, the U.S. quartet infuses melodies and aggression together. Halfway through the debut, the band continues to exhibit their brutal tendencies. The lead guitars play a crucial role in shaping up the songs as each component such as the melodies and the lead guitar are the strongest elements in structuring the songs.

“Eroded Faith” brings some crushing grooves with a brutal blow of the drums. Kurnugia has its own unique way of playing death metal. Aside from the blistering riffs, the growls sound barbaric and evil. There is a lot of variety and qualities that the band delivers on each track. For example, “Thy Sanguine Altar” shows how the twin guitars can churn out some killer doomy riffs. This kind of riff pattern makes the songs less predictable and catchy.

Many of these riffs are brutal and full of chugs. Kurnugia’s debut album is rapid-fire. The band offers many aggressive riffs that sound old school, backed by the gruesome type of growls and they are delivered furiously from the furnace of hell. Coming to the final two tracks, “All-Consuming Grief” and “Decaying Serenades” are brought by the effectiveness of the pounding percussion and dual vocalization. With such songwriting efficiency, the Ohio based quintet succeeded in modeling the methods of brutal death metal. The album also features a killer bonus track with a cover of the Sentenced track “When the Moment of Death Arrives”. This is definitely one of the highlights of the year 2020 so if you are into brutal death metal then give this album a shot!