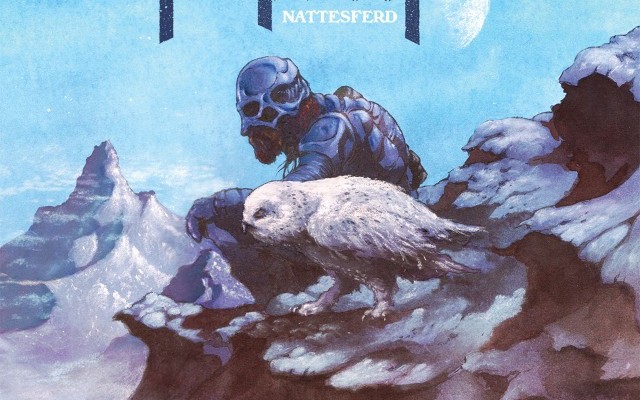 The crazy Norwegians of Kvelertak surprised everyone in 2010 with their debut album Kvelertak. The raw but somehow really catchy mix of black metal, hardcore/punk rock and rock ‘n’ roll kept a lot of fans in a stranglehold. With their second album Meir they gave us more of the same but even more mindboggling. They convinced some really big names from Dave Grohl (Foo Fighers, ex-Nirvana) to James Hetfield (Metallica) to even Norwegian Crown Prince Haakon. Now 3 years later they storm the world again with their third full-length Nattesferd (Night traveler).

Dendrofil for Yggdrasil kicks the album off with a song that has blast beats almost the whole time. The black metal is heavy in this one and vocalist Erlend Hjelvik turns his beast mode on early. Lyrically they’re singing about Yggdrasil, the tree of life and somehow mixed in the sexual preference of being aroused by plants. The absurdity that Kvelertak is regularly comes to be back.

Next is their first single 1985 (listen below), causing a lot of controversy amongst their fans. Some thought that they completely changed in sound, others loved their sense for adventure and wanting to try new things. They very much echo the eighties here -hence the song title- which is actually something that comes back quite often throughout Nattesferd. For instance songs like Svartness (Blackness) starting with very eighties chords and Berserker with a very (blackened) Iron Maiden-like sound starting very raw and fast but ending in a rather melodic song. Anyway, I can see the problem some people have with 1985, it seemingly being a watered down Kvelertak sound. But in my humble opinion it’s a damn catchy song filled with appealing hooks, much what they already were doing in Kvelertak on Meir.

Title track Nattesferd (Night traveler) almost seems to be there to redeem themselves to their fans after their little experiment. This one brings back more memories of their past 2 albums, starting off with some very melodic riffs giving off a rock ‘n’ roll vibe, bringing in the black metal/hardcore/punk rock mix in full effect after a bit and mixing in a bit of female backing vocals here and there. No worries, they haven’t forgotten what their sound is about!

Bronsegud, their Illuminati song, cranks up the punk vibe on a higher level. Being the shortest song, it really packs quite some energy. As if it would be needed, it almost seems they wanna bring back your attention, calling you back with a “Hey!”. The shouting in the back is actually something that quickly made this song an absolute favorite of mine. Good luck trying to time your “hey!” and “hu!” perfectly with them, it’s tricky, believe me I’ve been trying. Looking forward to give it another try with them when I manage to catch them on a gig this summer!

There are quite some really cool songs that I could say something about still, but a song that I really wanted to mention still, is Nekrodamus. Old-time fans might have noticed already that this is the third song containing “Nekro” in the title after Nekroskop on Kvelertak and Nekrokosmos on Meir). This song again has a sound that seems a bit differs from their usual stuff. As soon as the song starts you might think a different album has started. It has a very stoner sound to it that I wouldn’t have expected from them. Think of bands like Greenleaf and co. a very desert sound with fuzzy guitars all the way. Though of course it’s still stoner with a Kvelertak touch. A great song to end the album with and I actually hope that in the future they’ll consider adding some stoner again here and there.

This is yet again a great release by Kvelertak and despite the already known formula of mixing black metal with rock ‘n’ roll and hardcore/punk rock they’ve managed to surprise us again here and there. I sometimes miss the more raw approach of the first album a bit though. But with their switch from guitarist/producer Kurt Ballou (Converge) to engineer Nick Terry (The Libertines, Turbonegro) for the producing, the slight shift in sound to a more vintage rock isn’t that surprising. Nattesferd is an album you just have to check out to get your dose of weirdly catchy and heavy music. 8/10 for these Norwegian nutjobs.