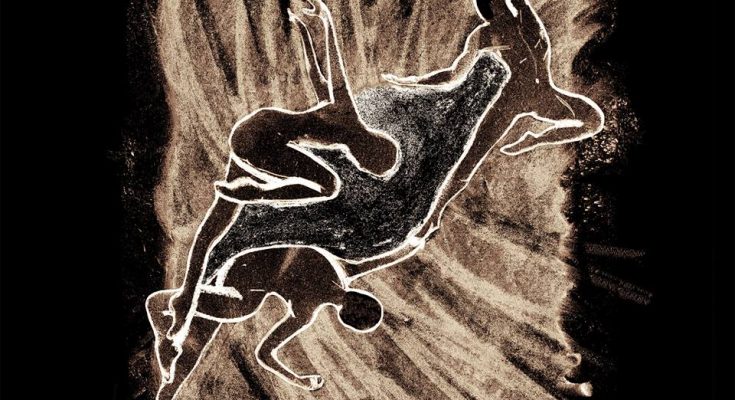 The Netherlands aren’t exactly fertile ground when it comes to black metal, but the ones that do manage to take root tend to be quite innovative, experimental acts. Just think of Urfaust, for instance.

The trio that makes up Laster is no exception to that. They’ve recently joined the renowned Prophecy Productions of which Het Wassen Oog is the first result. Their previous record Ons Vrije Fatum showed an evolution away from the atmospheric depressive black metal of De Verste Verte is Hier towards an openness for shoegaze & jazz or as they would describe it themselves obscure dance music.

Their most obvious characteristic is, of course, that all the lyrics are sung in their native Dutch tongue, which is something you’re not likely to encounter a lot in this or any metal genre. In all honesty, it still sounds weird to me to associate titles like Schone Schijn or Zomersneeuw with the devil’s music, but that is precisely what Laster is aiming for. The inclusion of more cleanly sung vocals, means you can actually make out what they’re singing now also, where in the past the lyrics might as well have been standard Klingon.

Their songs have in the past often been stretched out across a ten minute time span, which is something they have toned down somewhat on this eight song collection.  Consequently, the shorter length has also made the compositions much more dense, sometimes to the point of being entangled in chaos:  the hypnotic minimalism that is often inherent to this subgenre has all but completely disappeared. Within a few seconds it can change directions and style completely, like with the suddenly emerging Latin rhythms on the opening track.

The new songs display a fondness for jazz especially in the loose and often contradictory drum patterns that reminds me of other avantgarde acts like Shining or Dodheimsgard.

Consistent to the music, the artwork has developed in a uniquely distinct form that is consistently used throughout their discography: a highly stylized, almost abstract style that feels both like modern art as well as a Neanderthal cave painting at the same time.

The artbook edition will not only be a lovingly crafted collectible like we are used to by now from Prophecy, but it will also feature the exclusive 2 Song EP Stadsluik.