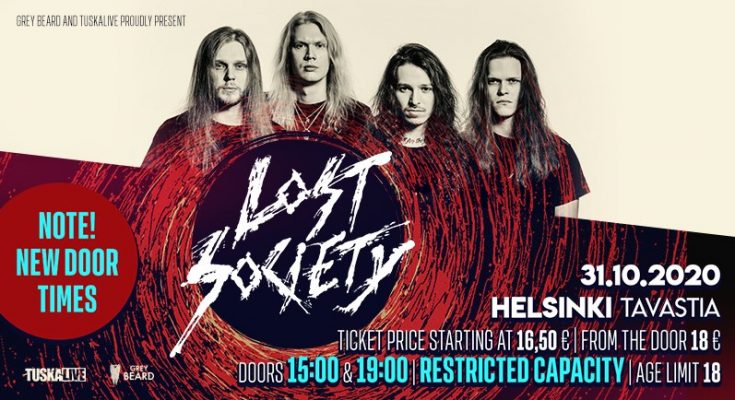 Back at Tavastia again! The venue has been hosting a series of quite cool COVID-19 safe shows by some of Finland’s more popular bands like Amorphis and Bodom After Midnight (CoB refurbished). This time we got around to enjoy one of Finland’s up-and-coming bands. Responsible for reviving the thrash metal scene in Finland and earlier this year having released the next step in their career with a more groove and hook laden album, Lost Society seemed ready to take on the world. Until the pandemic happened, that is. They did a pretty kickass live stream show, but we were all too happy to see these energetic dudes in real life on a stage…

After the announcement on the safety measures, the lights went out and ‘This Is Why We Ride’ by Body Count kicked in to warm up the crowd. The newest Lost Society **** member, drummer Taz (ex-Santa Cruz), soon walked on stage, greeting the Helsinki fans for the first time. And was pretty soon joined by Samy, Arttu and Mirko running on stage to immediately kick off with ‘Nonbeliever’ from their latest release ‘No Absolution’. And right from the start, the energy was through the roof. If there wouldn’t have been safety restrictions in place, the whole place would’ve most likely erupted into one big moshpit and crowdsurfers galore.

Most of the set was actually focused on work from ‘No Absolution’ with absolute killer tracks like ‘Blood on Your Hands’ and ‘Artificial’. Personally, I found it to be a pity that they didn’t play ‘Worthless’, the heaviest and harshest track on that album. I was really looking forward to experience that one on a live stage. But maybe it’s all for the better to safe that one for some time in the future where people can go absolutely berserk, that track deserves it. Of course we got a couple of old school Lost Society classics served up with ‘I Am the Antidote’ and ‘Riot’. Absolute belters and near monuments of the modern thrash metal scene in Finland.

The guys were clearly all too happy to be back in Helsinki and gave us that signature high energy Lost Society show that everyone was waiting for. Samy seemed almost clumsy at times bouncing around like he did, at some point having his guitar strap get lose and almost knocking over his microphone stand. After a handful of songs, the guys jumped into a little solo battle where I seemed to have caught a stripe of Van Halen and pretty soon Samy (as usual) lost his shirt somewhere along the way. Lost Society has only become hungrier by biding their time and once the world opens up again, you all better be ready for what is coming!

Setlist:
This Is Why We Ride (Body Count)
Nonbeliever
My Prophecy
Deliver Me
Blood on Your Hands
Solo battle
I Am the Antidote
Mark Upon Your Skin
Artificial
Pray for Death
Outbreak (No Rest for the Sickest)
Into Eternity
Riot