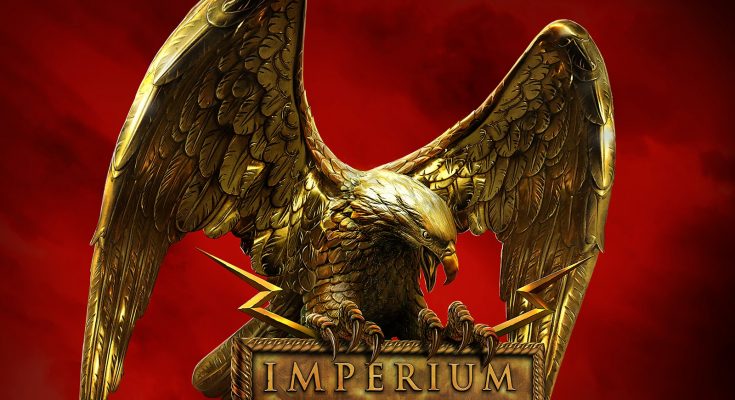 Power metal… the often tacky and at times overly happy music is not a genre that is my first choice on a day to day basis. I used to be really into the genre when I was younger, but got bored by everything starting to sound the same over and over again. Finland supposedly has the solution for this… a new force in the power metal has risen from the murky swamps, called Metal de Facto. You can easily call this band a “super band” with some of the best musicians of the Finnish scene: Esa Orjatsalo (ex-Dreamtale) and Sami Hinkka (Ensiferum), completed with Atte Marttinen (ex-Kivimetsän Druidi), Benji Connelly (Everfrost), Mikko Salovaara (Leverage) and “the dude with a hundred bands” Mikael Salo (Everfrost, Thy Row, Dyecrest…). They promise to “make power metal great again” and ‘Imperium Romanum’ is their first attempt in doing so.

And they don’t leave anything to chance. Straight from the opening track ‘The Conqueror‘ you get blasted by typical high energy power metal guitar licks and a high pitched scream. It’s a high octane track that doesn’t shy away from the stereotypical power metal galloping rhythm, blistering guitars, keyboard solos, and kind of cliché lyrics with the obligatory singalong choruses. But that is not a bad thing at all. Metal De Facto never said to be doing anything new, just to do it so well that power metal can be taken serious as a force to be reckoned with. And in that they’ve succeeded, even in just the first track.

‘Legionnaires’ Oath‘, ‘Naturalis Historia‘ and ‘Inferno‘ continue that typical power metal atmosphere, all carrying a similar epic feel and musicianship. One thing I can really appreciate besides the top-notch songwriting, is the consistent use of Roman history and mythology, not a topic you see pass by all that often. Another absolute highlight on the record, is obviously the track ‘Bacchanalia‘. A track with a typical upbeat feel and tasty riffs, but also with a melodic quality that is brimming with hooks in the chorus, taking up shop firmly in my head hours after I heard it only once.

After such a feast of energetic music, ‘Echoes in Eternity‘ is for me a bit of a letdown, but nevertheless a well-executed ballad-like track. ‘Colosseum‘ is a damn impressive instrumental track during which every single instrument seems to be battling gladiators in an epic setting. The rest of the album continues strongly with some of the longest tracks that are featured on this, telling tales of grandeur and great battles. Even when it might sound a bit similar at times, every single track shows off the musical skills of these guys and will blow you away when you’re open to it.

Did Metal de Facto make power metal great again? I actually believe so. Despite my usual dislike of the genre, I found myself regularly getting all pumped up, truly enjoying the music and never getting bored really, which is quite the feat. If their debut ‘Imperium Romanum‘ is any indication of what they still have in store for us, the future of power metal is bright.