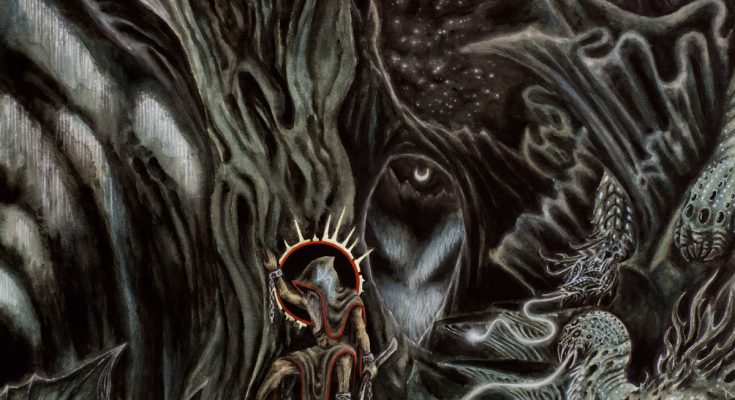 That one band that stays off the radar for a whole period of time and then pops up with a new album like it’s nothing is back. The one and only Dis Pater, sole member of Midnight Odyssey, returns and embodies a star that guides and enlightens our paths to the darkest caverns, the deepest oceans and even Tartarus itself (the deep abyss according to Greek mythology). Four years after the release of the second full length ‘Shard of Silver Fade’, the birth of a trilogy is looming with the deliverance of ‘Biolume Part 1 – In Tartarean Chains‘.

Opening track ‘Hidden in Tartarus’ was already released as a single in April and with this, we got a pretty good taste of what’s to come. The sweet taste of ambient astral black metal stays in the mouth for quite a while and explodes to its true form as the third song Biolume commences. Prepare for take-off and leave this tiny planet and embark the vessel that is Midnight Odyssey for a journey through space and time.

The beautiful artwork by Elijah Tamu represents the sound of Midnight Odyssey in a painting. True fans of the first hour will adore this album on first listen, although nothing new is served here. Dis Pater still creates lengthy atmospheric songs, that, contrary to first full length masterpiece and personal favourite ‘Funerals from the Astral Sphere’, are actually loaded with progressions and alterations and thus create less of a hypnotic state. Of course, beautiful synths and celestial guitar passages still create a unique and mesmerizing ooze, but this album is not the mammoth equal to the first full length, the true foundation on which this band’s legacy shall be built.

As always, Midnight Odyssey is meant to be listened to in one go as each song fuses into another and thus the entire album stands firm as a monolith. I adore lengthy and repetitive black metal but since this is the third album things do get monotonous. I guess it just lacks those huge bursts of energy we got from the first album, on songs like ‘Fallen from Firmament’. Don’t get me wrong, the first album also contains lengthy pieces of those same epic and transcending melodies but the reward, the feeling of something huge and divine coming up, was delivered as frequently as expected.

Never could I have imagined hearing a bad word about this band from myself, but it is what it is. It does make you want to revert to the first album, which does ensure it remains highly valued by enthusiasts and keeps Dis Pater as the founder of the specific sound Midnight Odyssey has managed create and the subgenre within black metal he has managed to put on the map.