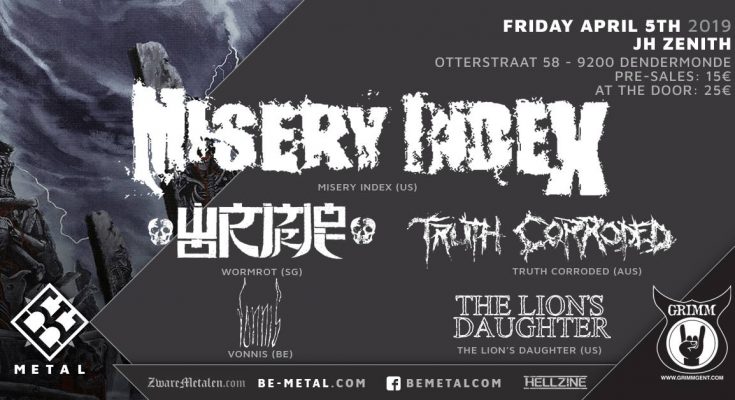 A few weeks ago I attended one of this year’s most anticipated gigs in the Belgian underground. Misery Index and Wormrot were touring Europe with support from Truth Corroded and The Lion’s Daughter, and they blessed us with a visit in Flanders’ lovely JH Zenith venue, in Dendermonde. It may have been the last date of their European tour but they still had some fury left in them yet.

A strange opening act from these lads from Ghent, but that’s more due to the vocalist rather than anything else, really. You can see he completely loses himself in his performance with complete disregard for himself or the audience. I think at one point he broke his hand. I had to chuckle – just as much as grit my teeth in anguish – because it reminded me of a show I attended not long ago where I saw, to my dismay, Teethgrinder‘s vocalist crack open his skull with his mic. It’s a good thing to be invested in your music, but please take care of yourself. Musically Vonnis are not noisy enough to be noisecore, and not fast enough to be defined as powerviolence, but they teeter somewhere nicely in between. Be sure you check them out at one of their upcoming events and their upcoming full-length. They also play Dour Festival this Summer, on Saturday August 13. I know I’ll be there.

This took me by surprise. I must admit I hadn’t checked out The Lion’s Daughter before this gig, yet I immediately fell in love with the band. I got a few avant-garde vibes the likes of Gojira and The Monolith Deathcult, respectively due to the overwhelming booming of the drum (despite the venue’s limited audio capabilities) and the use of samples, which are implemented in a way that makes them invaluable to the sound as a whole. Combine that with catchy songs and air-tight skill sets from the musicians and you have yourself a impressive show. A shorter set than I would have liked, but a more convincing performance than I expected.

I was looking forward to Australia’s Truth Corroded. They launch their set with ‘To the Carnal Earth’, the opener from their last record ‘Bloodlands’, which is a monstrously fitting way to kick it off. I desperately wanted them to start with that one, and I’m happy they unknowingly indulged me, because this is one hell of an opening track. And I works just as well live as on record. I therefore strongly encourage you to pick up ‘Bloodlands’. It’s a very strong death/groove release. A small downside here was stage presence. Although what they lack in that respect, they make up for musically, alternating between seasoned and fresher tracks. If you’re a fan of Kataklysm, this band’s for you.

Wormrot are simply the best, better than all the rest. I have nothing bad to say about my grindcore heroes from Singapore. They were the band most of my friends and I were looking forward to. And they delivered all right. One energetic sucker punch of a song after another, they all but destroyed the stage. And they could count on us for mayhem. The pit was violent. I’m not ashamed to say it was in part because of yours truly and co. If you don’t get pumped upon hearing the first aggressive guitar grind, I just don’t know what will get you there. I had to force myself to film a couple of songs because I didn’t want to leave the party. My only criticism here is directed at the larger part of the audience, who was near asleep for the set’s duration. I figure most of them don’t really listen to grindcore and were mainly attending to see Misery Index.

The band everyone was here for (well, mostly – see above). It is no secret Misery Index are a fixed value in the scene. They’ve been bridging the gaps between death, grind and thrash for close to twenty years now. Their latest release ‘Rituals of Power’ was a solid follow up to 2014’s ‘The Killing Gods’, even though I did prefer the latter somewhat (read the review here). The music is good ‘n heavy and their stage presence is extremely convincing. Maybe even a little intimidating, in a way that I was reminded of a few Revocation gigs I attended in the past. Misery Index are proof that you don’t need to move around a lot to deliver an effective performance. Not that they could in such a small backwater venue. They had some fun interaction with the crowd who made sure to return the favor by moshing, headbanging and yelling out in utter delight. To close off the set, and at the same time the tour, they graced us with two encores.

Well, what a Friday night it has been. Lots of emotion tonight, I must say. From the bands as much as the crowd. We laughed, moshed, drank, ate, hung out with friends and band members alike, talked about music, were bummed at sold out merch, etc. What else could we wish for? And we still had the entire weekend ahead of us. If that’s not a fitting end to another great trek in the underground, I don’t know what is.