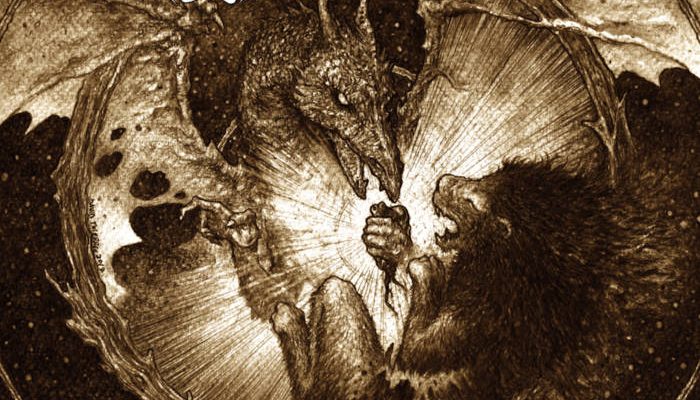 Black metal music comes in many forms, from symphonic, melodic to the old school way where bands mostly like to merge the elements of thrash with black metal. Australia’s black/thrash metal Mongrel’s Cross deliver their sophomore album Psalter of the Royal Dragon Court through Hell’s Headbangers Records. This duo band which is based in Brisbane has the tendency in playing cult black metal style which brings lot of similarities to their country mates Deströyer 666. After six years of break the Aussies channels though the raw territories of old school black metal, the opening track King of the Beast is a solid track launched with excellent tremolo guitar riffs and occasional blast beats.

The vocals are very clear and presented in its evil raspy style, though the band is categorized as thrash/black metal the music is mostly mid paced. Neurian Transformations has more melodic flavour to it , but overall its mixed with thrash elements while maintaining a raw and heavy sound. Mongrel’s Cross has the quality to impose their identity to their songs, the new album comes in eight tracks which draws the 80’s influences to their music.

The Thirteen Card is a good example of how the band prefers to imply methods of mid pacing while adding a melodic surge into the guitar riffing, the drummer does a great job in creating the necessary dynamics to the tracks. And while listening to this sophomore releases I notice a great amount of solos, the complex combination of metal genres like heavy, speed metal and thrash metal are closely adhered to the tracks. Mongrel’s Cross are building and molding their own style with plenty of melodies and inflaming riffs.

Mongrel’s Church is a unique band that grew on listening to classic thrash and heavy metal bands like old Kreator and Iron Maiden, so therefore you can hear the mixture of style in their music. The melodies are very catchy with clean guitar sound, maybe the only thing which the album is missing is the aggressiveness of the riffs but this doesn’t makes the songs sound less raw. Derkesthai – Initiation is played in more thrashing style, this up tempo track shows the direct roots of this band where influences from Deströyer 666 and Bathory are clear. Mongrel’s Cross sophomore album makes a larger and heavier approach towards blackened thrash metal and shows a good achievement.

Trail of Serpents is another track which caught my attention, offering a dark sound with a minimal use of keyboards to add a darker texture to the songs, the variety in fusing neck breaking solos makes this track one of my favourites. Psalter of the Royal Dragon Court is good album and this band has all the potential to emerge largely in the future. The duo members have composed some complex and powerful tracks making this release very satisfying.