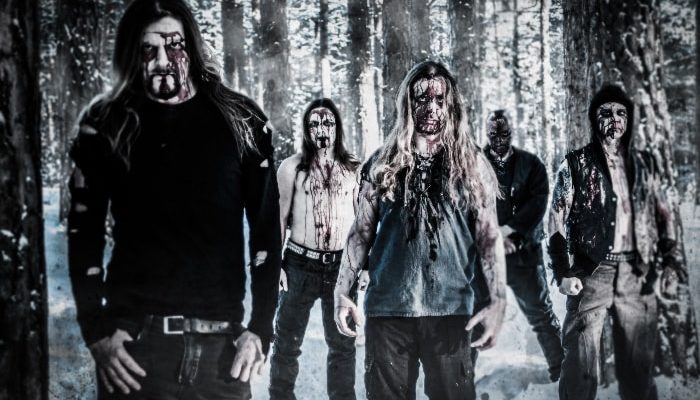 Last year Moonsorrow released their new album “Jumalten Aika” that seemed to go back to their more old school pagan sound (for the review go here). Seeing that they were playing at one of the more legendary venues in Helsinki in their homecountry, we just had to be there. Being quite impressed by their latest effort, I sat down with vocalist/bassist Ville Sorvali and guitarist Mitja Harvilahti to talk about their album and inspirations.

Hey guys, nice to meet you! How are you? I sort of caught that you might not be feeling the best at the moment…
Ville: Why? Tired and a bit hungover that’s all, I’ll be fine.
Mitja: I just brought you a glass, that should help…
Ville: Yeah!
Mitja: And I’m feeling fine.

Well, that’s good. And I’m sure that once you get on stage you’ll totally forget about not feeling the greatest!
Ville: Yeah, I actually like the feeling of being a little bit hungover and tired because you know that is going to get better. If you feel too good in the morning, the show is going to be bad…
Mitja: Yeah! I think it was actually Frank Sinatra who said “I feel sorry for people who don’t drink. Cause when they get up in the morning, that’s as good as they’re going to feel all day…”

There’s something to that… Now, you’ve been touring quite intensively in support of your latest album Jumalten Aika. How has it been?
Mitja: Really good.
Ville: Yeah.
Mitja: We had fun.
Ville: Yeah, every show has been great, the crowd has been excellent.

And outside of Finland, you’ve been doing a shared headline tour with Korpiklaani. I thought that was an interesting combination since the music of Moonsorrow and Korpiklaani are almost completely opposite.
Mitja: It works well. I like to see us as the two different sides of the same coin: we’re the darker side of folk metal and they’re the brighter side, obviously.
Ville: Many people found it strange, but then again some people really loved it. In the States for example we’re easily on the same bill, but here in Finland see it as a little bit strange. In some European countries we got some feedback like “how is this possible, how can you be on the same bill?”. At other places no one complained really.

Well, not much to complain about since you see two great Finnish folk metal bands… About your latest album Jumalten Aiken: personally I really liked it. But how has the other response been like from fans, press,…?
Ville: It couldn’t be better, I think. The album surpassed our own expectations in many ways and it seemed to do the same for many people. Not too many negative reviews, at least… (laughs)

Yeah, I scored it really high as well. Especially since it seemed like you were going back a little bit more to your older pagan folk metal sound where you mixed folk elements with black metal. Did you guys do that on purpose or did it just happen to be that you created that more old school sound?
Mitja: Well, I would lie if I said something else. We deliberately tried to dig up something of the past, but mix it with something that is new.
Ville: Yeah, it was a clear decision that we wanted to have some elements that we have on the first albums. Because we were kind of tired of the stuff we were doing on the last couple of albums. We need to refresh our ways of making music anyway, so it felt very natural and inspiring.

You could hear that on the album… What I got out of researching the lyrics and such a bit, I think I understood that the story is sort of a history of people experiencing religion, and them losing touch with religion and be selfish towards the end of the album. I don’t know if I got that right in my review?
Ville: I think you got the point. The idea was to take some old myths and try to make interpretations of them like “what were these people actually thinking while they were writing these stories?” because after all they’re still just stories. But they meant a lot to them, like why they came up with this thing. And near the end, they are forgetting about all these things and… yeah, acting selfishly… we don’t really need any guidance anymore.

Is that in a way bringing a sort of message to this world and how it is today? Or not really?
Ville: Euhm… there’s a message but I’m not a preacher, you can take it as just a story. If you want to see or hear a message, it is there, but you don’t have to. The main purpose is still just to make an entertaining story. Though I like to challenge myself with all these hidden messages of course, it wouldn’t be fun otherwise… (laughs)

On one of the songs on the album you seem to be using a Finnish choir, how did you come to use them?
Ville: It’s us… (everyone laughs) There are no trained professional singers we use at all. Actually there is one, but he’s not a part of the “choir”. It’s just us and a couple of friends.

Ok! Interesting to know! Now, your music and lyrics are mostly pagan inspired and what I’ve read online is that all of you guys are into paganism to a certain degree. Are there any things you do with that in your real life?
Ville: It’s a state of mind mainly, we are very non-religious. I don’t think there’s any use for these religious symbols, they are just symbols for the things that the people used before they had all the scientific aproaches. All the gods represent just things that happen around people, like rain and stuff like that. We know now what rain is for example… As far as paganism goes for me it’s a way of thinking and seeing the world around me. Trying to remember to respect nature mainly, ’cause that’s what it’s all about… nature.
Mitja: Yeah, same here. I guess all of us are anti-religion people, it would be stupid to start worshipping something that you actually don’t think exists. We are in a different time now than 1000 years ago, it’s good to know the history and respect your own stories and cultural heritage. It’s very important to maintain it so that it’s not lost, ’cause every country, every nation is unique. And these things get lost and we live in this strange mono culture of Mc Donalds and whatever. If we lose all of that, we lose part of our identity and all these things that build our cultures. Every single culture has been build by stories and such.
Ville: Yeah, it’s invaluable information, all these stories. ‘Cause through them you can get a link to how the people coexisted with their surroundings. And that’s something we really need to learn from before we destroy this planet and with it our own source of food.

It always interests me to hear of other people how they see the mindset of being pagan since I see myself as such too. How did you get into paganism?
Ville: It’s just something that grew within me… when I started to think about things more independently. It just gradually happened, I don’t know why.
Mitja: With me it came with the family, cause my father is a professor who is very famous for his studies of Kalevala (a work of epic poetry compiled from Karelian and Finnish oral folklore and mythology, FYI) and such. So from very young age I had him tell me stories of different cultures, whether it’s Asian or European or such. And he always told me that you can believe in something if you want to but you should always doubt. Jesus Christ you hear about in school might not be the wise choice to follow… (laughs)
Ville: It also helped me that I grew up in a non-religious family of course. ‘Cause they just showed me the options available and reminded me that they’re all just stories.

It’s always interesting to talk about that in my opinion. But well, you just released a new album, you’ve been touring a lot… any nearby future plans with Moonsorrow?
Ville: With Moonsorrow not that much…
Mitja: We have a couple of shows in sight still…
Ville: It’s a constant battle of finding time to tour… behind the scenes all the time, every single day, there are tons of emails about “if we can”, “can we?” and “where?”. So we’re constantly in a planning stage…
Mitja: We have families and work that makes some of us more money than the band. It’s always a very interesting and well, annoying puzzle. We always find some time though.

So if you’re not busy with your music, what do you do the for your day job?
Ville: I actually work in the music business, just on the other side of the fence: build-up and tear-down for bands. That’s what I’ve been doing now since the year 2000.
Mitja: I work for the TV, camera and lighting and such.

Now something more light: imagine you get to organize a Moonsorrow festival, what bands or artists would you want in the line-up?
Ville: I don’t really know, but whatever the billing would be, I think it would surprise a lot of fans.
Mitja: Are you sure? (laughs)
Ville: I don’t think it would feature a lot of bands that work within the same, let’s call it folk metal category.
Mitja: Yeah, that’s true. Maybe some old friends of ours, but the others might be interesting…
Ville: Anything going from grindcore to weird electronic music, we listen to all that… very different types of music. (laughs)

Talking about grindcore: I know you had a fun little side-project (Lakupaavi, FYI) going some time ago…
Ville: Some 12 years ago, yeah! (laughs)
Mitja: Still have it! It’ll never die! When we die we’ll make sure we sold the franchise to someone else!

…is there ever anything new coming from that some time?
Ville: Yep!
Mitja: No one knows when…
Ville: We actually already recorded one song, we just need some vocals and stuff, but it’s going to be quite different from the first one… nothing similar actually!

I came across it while doing some research and it seemed like an interesting project, so something to be looking forward to…
Mitja: It was very interesting to make…
Ville: Yeah, the most outrageous 2 days in my life I would say, in the studio… complete madness…

I think I’ve asked about everything now. Any last words still?
Mitja: I hope these are not going to be the last words… (everybody laughs)

Ok, last words of this talk then?
Ville: I would say we’ve been extremely happy to see how many people have been showing up to see us. We’ve been trying to tour more, so it was good to see everyone on the road.
Mitja: Yeah, it has been a good ride!

Thanks a lot for the talk, guys! Have a good show! 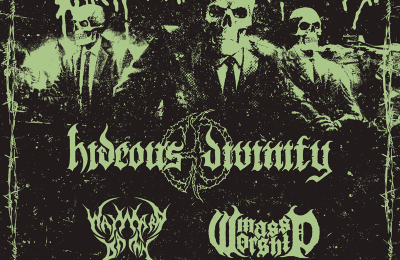 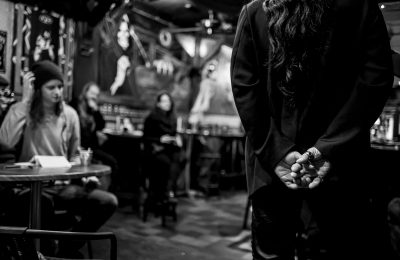