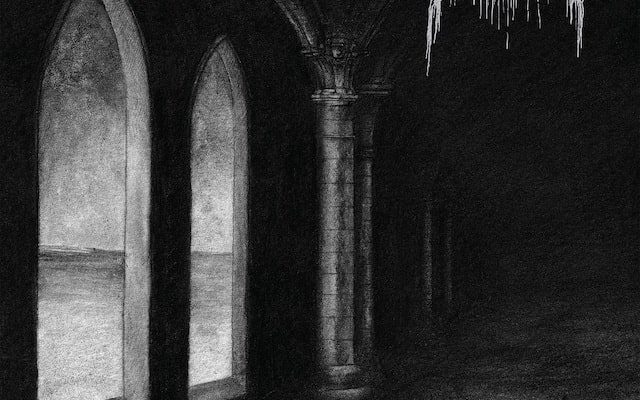 Norway’s black metal outfit Mork returned with the fifth album “Katedralen” released via Peaceville Records on March 5th, 2021. Formed in 2004 by the prolific musician Thomas Eriksen, the outfit has been wearing the old school influences from bands like Darkthrone. With such talent in composing his craft in classic black metal style, the band kept maintaining their sound by each studio album. Despite the fact that there are plenty of groups playing old-school black metal, Mork is certainly one of the most distinguishable bands in Norway. “Katedralen” doesn’t fail to deliver traditional tremolos, the riffing is quite solid with bleak melodies based on old-school technique. Over the years Mork managed to sculpt the cold icy riffs that resemble the true sound of Norwegian black metal. And this is to say that the newest album meets the expectations of the fans but there’s more to uncover.

As the opening track, “Dødsmarsjen” kicks in the grim frowning face of the North men, it heralds the savage barbarity. By applying the heaviness of the guitars creating a massive wall of sound, Mork offers something to sink your teeth into. The extra dose of ferocity comes from the striking drums while the catchy guitar tone makes the song irresistible. The riffs are varied and somewhat fierce, where one cannot deny the strong old school influences. The pacing shifts between heavy grooves and aggression while the drums are played at variable tempos. “Svartmalt” delivers thick aggressive riffs where Mork brings the traditional rawness of black metal. From the raspy vocals, the guitars present some bleak melodies, with the rhythm guitars focused throughout.

On the newest album, Mork has managed to bring the different compositions of elements with for example the use of clean majestic vocals on “Arv” creating a cold atmosphere. The riffs are catchy with the melodies giving it a prominent feature, taking the music to the peak intensity. There is plenty of slower tempo which somehow gives more balance to the drums and guitars, even the bass contributes to the sonic sphere. As in whole “Katedralen” showcases the talent of the band as the most captivating aspect of the album and the tremolo pickings are overwhelming. Taking more of a primitive approach to black metal, Mork incorporates the cold riffing and most of the songs contain repetitive melodies with constant mid-tempo, though you will encounter many slower parts that are full of hooks. There are various riffs being used as each instrument gives some kind of characteristic sound. Compared to the previous album “Det Svarte Juv” the musical work here is flawlessly oriented by the excellent instrumentation.

However other tracks like “Evig intens smerte” are notable for the plethora of dissonance and riffing patterns. “Det Siste gode I meg” takes the inspiration from mid-era Darkthrone albums such as “Plaguewielder” and “Sardonic Wrath”, where the band flawlessly conveys the old-school vibes. While still sounding fundamentally solid sticking to Norwegian black metal roots, Mork seems to rebuild the signature sound.

Being swiftly and persistently played, the drums unleash tides over tides of blast beats and double bass. For instance, “Født Til Å Herske” takes an aggressive reversion of the second wave black metal. “Katedralen” is harsh and cold, its savage take shows an impeccable performance. But I must say that the slower guitar sections, including the melodies, are overwhelming. Mork combines sheer aggression with hooks that lend some of the darkest moments to the songs.

While still keeping the intensity at full force, “Lysbæreren” showcases a unique way of engaging the scathing riffs with the pacing drums. Whilst the album closure “De Fortapte Sjelers Katedral” is full of abrasive riffs played at unsettling tempos. The songs are not affected by experimental touches here and there the latest work injects some fresh blood into the composition but overall. The band seems to be circulating through the old school template of raw black metal.

Apart from the new album, Mork has also hosted an exclusive live show “Live Streaming Black Mass” which is now streaming on YouTube in its entirety so check it out. “Katedralen” is recommended for fans of Darkthrone, Satyricon, and Mayhem.