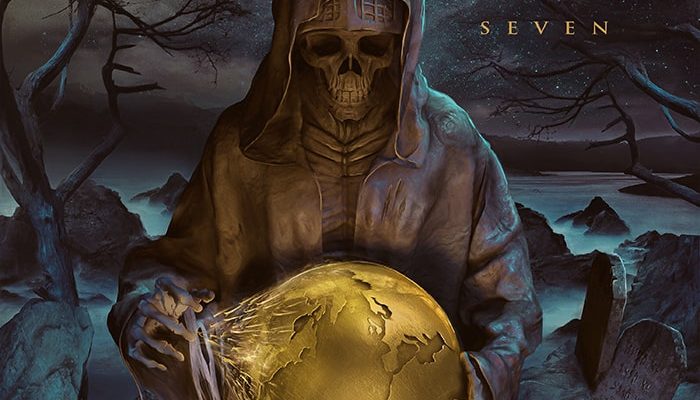 Mors Principium Est is a Finnish melodic death metal band formed in 1999. These guys have always had a steady line-up until the release of their sixth album ‘Embers Of A Dying World.’ Then came some changes and by the release of their seventh album with the iconic title ‘Seven’ there were only two members left: Ville Viljanen (Vocals) and Andy Gillion (Guitar, programming).

After a short classical intro they unleash hell with ‘A Day For Redemption.’ Nice melodic death metal with some tempo changes from fast to slow.

‘Lost In A Starless Aeon’ is a faster song with a genius on the guitars. The riffs he pulls out of his hat are legendary. ‘In Frozen Fields’ holds a significant role for keyboard player Andy Gillion. The other instruments just follow the keyboard tunes. Nice one. Mors Principium Est has always been a band that can create a fantastic combo between keyboard and guitar like Children Of Bodom. Just listen to ‘March To War.’

‘Rebirth’ is one of the shorter songs but isn’t less good. They can write compact songs and give them their unique sound. ‘Reverence’ is a classical intermezzo and a nice resting point after all the violence. ‘Master Of The Dead’ is one of those longer songs, pushing 7 minutes, but it never gets boring.

‘The Everlong Night’ is a faster one, no time to breath, just blast away. In ‘At The Shores Of Silver Sand’ a lot is going on from fast melodic pieces to classical intermezzos, melancholic choruses and fabulous solos. We end this album with ‘My Home, My Grave’ and they saved the best for last. I can assure you.