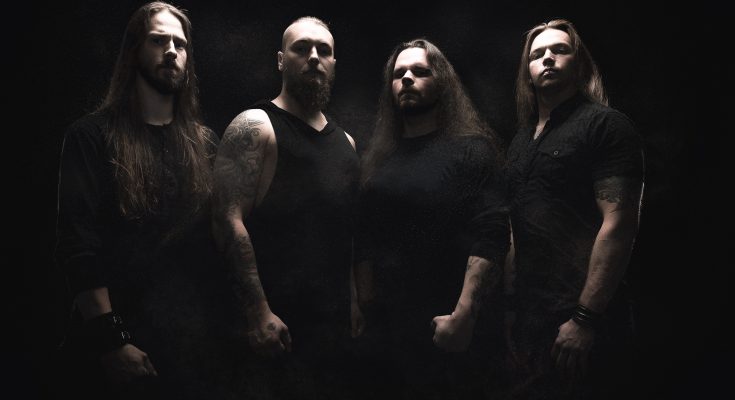 A couple of months ago, Finnish melodic death metal band Mors Subita released their third full length album. so we thought it was a good idea to send the dudes some questions. they were answered by the bands guitarist Mika Lammassaari.

First off all. How are you guys doing?
Hi! We´re doing great, thanks. Preparations for the Japan tour and the summer festival gigs are going good and we´re very excited for the upcoming gigs.

The  new record is just released. What are the comments so far?
We´ve actually been overwhelmed how well the fans and critics have taken the new album. The most frequent comment must be that the album as a whole is much stronger and versatile than the previous one and that the band sounds more welded together. We feel the same way.

Into the pitch black is your third full album. Do you think a lot has changed over the years, in terms of writing, sound, recording?
We´ve definitely grown on all of these areas. Writing has pretty much stayed the same, although it´s nowadays a lot more focused and faster process because we know what works and what doesn´t. Only the balances of the responsibilities have switched a bit. Nowadays I write pretty much all the music and do also the arrangements. Eemeli does all the lyrics and vocal arrangements with a few exceptions. As what comes to the producing side of the creating process, we´ve learnt immensely. We have done the recordings ourselves always and throughout the years we´ve found the right working methods for each instrument as in how to capture the best possible sound and performance.

Is their any song in particular that really stands out on this record for you? And for what reason?
Good question. I think all the songs in their own way are very distinctive on the album. I wanted to write an album which is meant to listen from the start to finish as a whole and the listener wouldn´t get fatiqued during the process. For me the highlights on the album are As Humanity Weeps and Dead Sun. These songs capture very well the core of how I want to compose – crushing heaviness mixed with nice melodies.

Is finding inspiration for new songs hard, or is it like more something that comes automatically?
It comes automatically, but also it´s a very fragile state. If I feel that I have to force something during a writing process, I usually quit right there and take a break for some period. When the time is right and the riffs are flowing, it all locks into place very naturally.

How did you come up with the name Mors Subita?
From a medical dictionary. It was only a blind toss of a finger on to the book. Sounded good, sounded violent and different (in 1999) so we sticked with it.

As a band, what are your biggest influences/heroes in music?
All our member’s musical influences differ a lot from each other. But I´d say all of us really dig the early Gothenburg melodeath scene, which is no surprise. Some guys are really into black metal and some even stretch out to fusion jazz. The influences vary a lot. Everybody has of course their heroes on what comes to each of their instrument. I know Eemeli is a big fan of CJ from Thy Art Is Murder, June, our bass player digs the hell out of Periphery´s Nolly´s bass playing and his sound. Ville is a different beast, I think he enjoys something in between Toto and Dimmu Borgir. Some of my guitar heroes are Steve Vai, Jeff Beck, Joe Bonamassa, Dimebag Darrell, Marty Friedman…

Are there already plans in the form of touring in the near future, or other big plans with the band?
Next week we´re embarking on a tour in Japan. Then it´s time for summer festival gigs. The plans for next fall are not out yet. So, stay tuned for news on our facebook and homepage.

Is there anything else you want to add to this interview?
Support the bands you like and love. Keep the metal flowing.

Thank you for the interview, and good luck.
Thank you very much!