Home Death Metal Moss Upon The Skull – In Vengeful Reverence 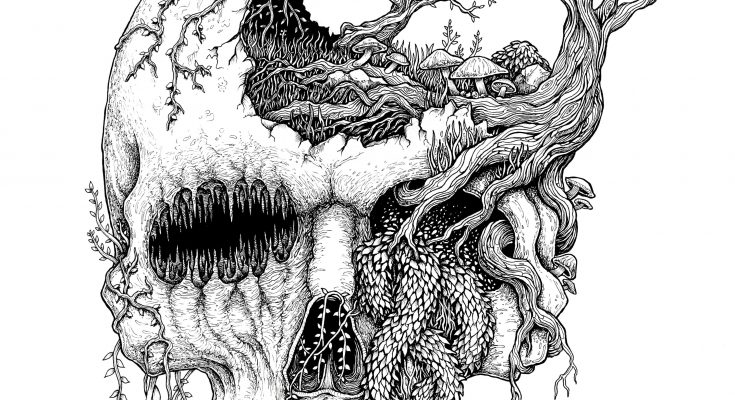 Dead by Dawn Records keeps picking the cherries out of the death metal pie in the lowlands area. After bringing long time scene veterans Exoto back from the dead and celebrating Thanatos’ thrashing anniversary with an exclusive 7”, it was time to pay attention to some of the new, hungry blood out there.

Moss Upon the Skull is a young band from Brussels with 2 EPs to their name, conveniently assembled also on a single compilation should you feel inclined to shell out for their primordial stuff. Last year their debut full-length, ‘In Vengeful Reverence’, saw the light. First on CD via I, Voidhanger Records, but now recently also in the hallowed vinyl format and even on tape for the trve cvltists under the wings of Belgium’s newest record label Dead by Dawn, led by the girl more devoted to extreme metal than anyone I ever met.

The sober black and white skull artwork is the finest one they have had on the label so far. Intricate and striking, just like the album itself. The risk with technical or progressive death metal is that it’s so easy to get tempted into excessively showing off your guitar or drum playing skills and not focusing that much on the song itself. This more than often results in a record that might be interesting for pure tech geeks, but the average extreme metal fan just won’t find anything to latch on to. Luckily, there are plenty examples where bands do manage to find that delicate balance between songwriting and musical muscle rolling.
‘In Vengeful Reverence’ looks to be one of those records.

Most of the songs are pretty condensed and concise, focusing only on a few intriguing ideas at the same time rather than trying to incorporate everything but the kitchen sink every turn on every single track.
‘Reverse Celebration’ get of a to classy start with a pretty heavy, almost ‘Hell awaits’ like intro before it moves to classic ‘Chapel of Ghouls’ style Morbid Angel.

Vocally you get an interesting interchange between the deep abyssal growls of Jo Willems and the choral like clean singing from both guitar players. Those come across as a hybrid between Emperor and Akercocke’s own choral like arrangements. They experimented with this already on the ‘Scourge of Ages’ EP, but have expanded upon it with this release. ‘Disintegrated’ gets off to a flying start and keeps blasting away at full speed. Again you’ll encounter the interplay of the vocalists midway through the song.

The brooding ‘Impending Evil’ takes it down a notch or two with some contorted, twisted riffing. ‘Lair of the Hypocrite’ is another fast one, but ends with a pretty doomy outro. ‘Serving the Elite’ serves as a menacing homage to ‘Domination’. You could have derived it a little bit from the title, but ‘Peristalith’ is one of the more difficult songs on display here, twisting and turning in its four-minute course.

As any self-respecting title track should, ‘In Vengeful Reverence’ sums up everything all the defining elements of the band. ‘The Serpent Scepter’ takes a turn for the melodic with some well-placed tasty solos. ‘Spheres of Malevolence’ lashes out in particularly frantic, angular chops before the closer ‘Unseen, Yet Allseeing’ pulls out all the stops one last time with an unrelenting pace to end in an almost Opeth-like progfest.