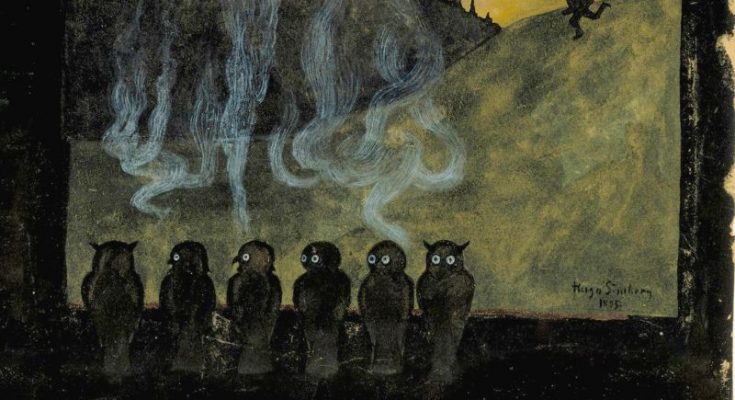 I usually have a harder time getting into a band who write their lyrics in anything else than English. Don’t exactly know why, but I think it’s because the singing intonations are different to what I’m used to. But after a few spins I usually get the hang of it. Such was the case, for example, for the Canadian death/crust unit, Saccage, who almost exclusively sing in French. Or the Norwegian nutjobs from Tottal Tømming who also grind in their mother tongue. The latest offering from the Finnish lads from Mustasuo however was much easier to get into from the get go, despite singing their lyrics entirely in Finnish, a language which is considered a rather difficult language to learn. Even by the Finns themselves, I’m told. Yet their second full-length record ‘Katharsis‘, follow-up to a short 2016 split with Napalm Ted and a first full album simply called ‘7‘ earlier that year, was indeed an instant delight for me.

We kick off the record with the typical sound of guitar feedback, which you’ll come across easily in grindcore and crust. To be honest, I completely expected it. Classic move! I also expected the lo-fi riff chiming in right after. Now, before giving this record the ol’ spin, I quickly checked out ‘7’, and it turned out to be as DIY as it gets. Not a bad first record, but not one I’d return to. A good performance but quite lacking in the production department.

Needless to say I wasn’t surprised at the audio quality here… until the d-beat licks kicked in like a freaking explosion. Way to catch me off-guard, guys. It’s just as clean as you’d want a top-shelf grindcore record to be. Unsurprisingly so, since we’ve got Rotten Sound‘s very own Keijo Niinimaa behind the mixing panel.

Mustasuo seem to have chosen the right man for the job since the record clearly meets the standards set by their fellow countrymen. Listening to ‘Katharsis‘ was just as intense an experience as putting on Rotten Sound‘s ‘Cursed‘, even though they don’t fall completely into the same category. Still, we can bestow Mustasuo with the grindcore title. The title track ‘Katharsis‘ and further down the track list, ‘Tapahtumahorisontti‘, are simply raging with the dry fury I love about the genre so much.

For those who like it a bit crustier, don’t quit on me yet, because that’s still the gist of this album. Tracks like the opening ‘Kärpäset‘, ‘Kun Illuusio Särkyy‘ or the closing track ‘Noitaympyrä‘ will make you want to put on that black denim shoulder-studded patch vest you dropped in a puddle of dubious consistency at a Doom show once and never cleaned since. The occasional sludge or black metal loving fan too will be pleased with tracks like ‘Tuomitulle‘ or ‘Kuilu‘ respectively. I’m not gonna go over every genre which inspired Mustasuo‘s ‘Katharsis‘, but I will emphasize there’s something for almost every fan of more extreme genres to be enjoyed.

Even though Mustasuo only boast a short discography, they have really stepped up their game here and in doing so have raised their own bar to new heights. And to those lyric hunters among you, don’t let this record scare you off. It’s well worth your valuable time. I sincerely hope these Finnish kids get picked up by a few of the older generation on a tour outside of Finland when the pandemic is over, so we can enjoy a performance on stage that will, I hope, be as intense as this record. Catharsis, indeed.