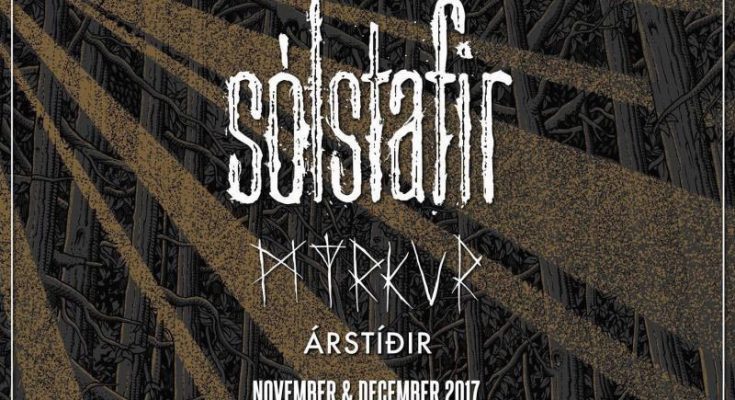 As you all probably know, Sólstafir has done quite an impressive tour together with Myrkur and Árstíðir during the months November and December. With 30 shows in 18 different countries, they were bound to visit Belgium sooner or later. Luckily enough, I was able to catch them when they hit the stage at the VK in Brussels on the 18th of December.

Due to a Christmas market being on at the time and thus there being a lack in free parking spaces, I was too late to see opening act Árstíðir. From what I gathered though, it was quite an experience and well worth while. Unfortunately there are no known tour dates for this band as of yet but hopefully this will change soon. However, here is a live video so you get a taste of what the band is and what they bring to their shows.

I was however in time for the second act: Myrkur (****). Despite having been in many line-ups at different festivals, I never got the chance to actually see them. I was actually looking forward to seeing what these Danes had in store for us and they did not disappointed. The harrowing tone of the music set quite the atmosphere. The voice of Amalie Bruun and the overall experience they brought forth gave me chills. It was the same complete package of compelling, hypnotizing music that Sólstafir is. The advertisement of their new album Mareridt says it all really. It’s a superb, horrific beauty. It was an experience shared with the rest of the audience since we all just stood there and watched,  and listened as we took it all in. I will definitely be seeing them again at Metaldays this year.

Despite the great line-up, many people were there for one reason only. That reason being the last band of the evening: Sólstafir (*****). A bit like the previous band, Myrkur, these guys gave it all. As the lights dimmed, so did the sound of the crowd. It was something I’ve hardly ever experienced, yet it felt so familiar. Despite not knowing what was being sung, the music had a way of making you feel a certain way. Everybody interpreted it differently but in the end they all experienced it the same. It was an hour of being in a different place, where you’re with three hundred people but you’re all alone. Alone with your thoughts. Words can’t actually describe what it was like but I can say that this band’s a godsend. It’s needed it a world where there are a lot of worries. Where lots of people are practically forced to think about the troubles that tomorrow may bring. The band also shows great appreciation towards their fans. After the show, for example, they came and mingled. Something you don’t see many headlining bands do nowadays. This only upped my respect for them. If you happen to have missed them or if you want to relive the experience, Sólstafir is set to play Alcatraz metal festival on Saturday the 11th of August.

Can’t wait that long? One of our photographers made a photo coverage. Also check out her facebook page here.