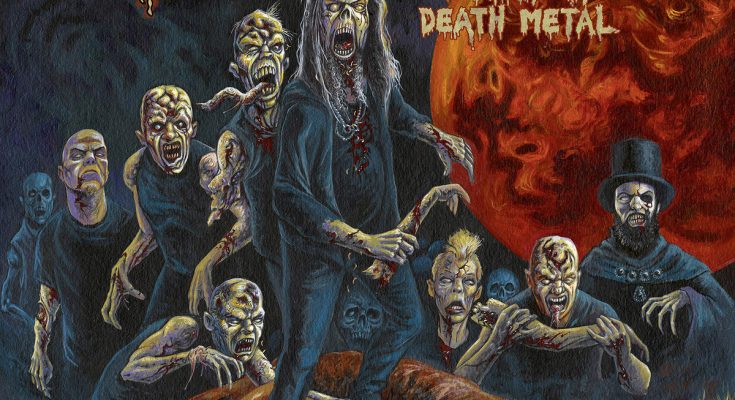 Damn has it been 35 years already? Man, I’m getting old.

Necropaghia had been a steady staple in extreme metal for well, ever since there was something like extreme metal. Sadly enough, Killjoy, the main driving force in the band, left our mortal plane last year, effectively ending a three decade spanning career which he had spearheaded through all trends and hypes. Necrophagia was there at the very beginning. They were one of the very first death metal bands alongside Death.

Of course, in that primordial stage death metal was not really defined as a genre yet and sounded more like an over the top version of thrash with Killjoy’s vocals something to be described as an acquired taste, sounding more like the ravings of a brain starved zombie than your average abyssal grunting. The subtitle of the record is slightly misleading as this compilation doesn’t actually feature any of their early demos but starts out with their legendary debut ‘Season of the Dead’ from 1984. For a pretty comprehensive overview of their earliest material you need look no further than the ‘Power Through Darkness: The Demos’ compilation, which came out earlier this year. The band broke up after their debut and was put on hiatus for several years.

You could consider the pseudo bootlegged ‘Ready for Death’, which was originally meant to be their actual first record and was in many ways a rawer, more necro version of the record that eventually became ‘Season of the Dead’. Many fans revere this version over the official one, but that is a matter of taste I guess. It has been left out of this compilation in any case.
It wasn’t until about a decade later none other than Phil Anselmo played a couple of riffs to Killjoy that the old corpse was brought back to life for the ‘Holocausto de la Morte’, a comeback album truly worthy of the name, for once.

Stylistically not so much had changed. Lucio Fulci’s back catalogue of cult horror was still being pillaged by the murkiest, heaviest death thrash riffs they could muster. The band kept a pretty active schedule after that with albums like ‘The Divine Art of Torture’, ‘Harvest Ritual Volume I’, ‘Deathtrip 69’ and the final nail in the coffin, ‘Whiteworm Cathedral’.

Each of those records are fairly represented on this little collection. Since variation is not that big of a thing here, the songs are quite interchangeable one album from the other. So you could almost tell any newcomer to the band that this “new” record is simply the best Necrophagia record ever and keep it at that.