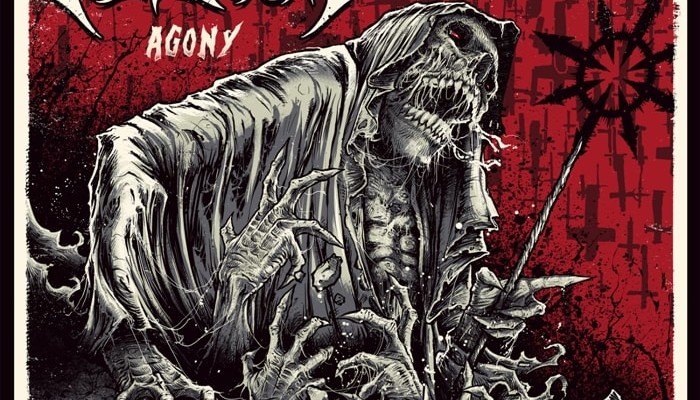 In Brazil there’s a really big thrash and death metal scene with bands everywhere. One of those bands got picked up by Napalm Records a few years back and rose from its underground position. I’m talking here about Nervosa, a pretty young thrash band that has been convincing metalheads everywhere in the world. Last year’s summer they went on a big European tour in support of their first album Victim Of Yourself and haven’t rested much ever since. Shortly after finishing their tour they started recording their second album Agony that is hitting the shelves right on time for their European tour of 2016.

As soon as you hit play, you’ll get blown off your feet by the pure, raw energy and ferocity of their music. Fast paced drums, heavy riffs and an impressive scream sucks you into Arrogance, a whirlwind of thrash metal that regularly touches the border with death metal. This band is simply brutal and downright nasty! I can see a crowd going nuts on their music, shouting along “Arrogance! Arro-arrogance!”. Every single song is a head crushing, face melting and angry piece of thrash metal, ideal stuff for working out frustrations. Since they’re a trio every single member has to know their stuff and my God, do they know it! The drums set a crazy pace but gets its moments to shine with different drum rolls and small touches that you might not expect. The guitar riffs are perfectly executed and have a certain groove to them despite the brutal sound. And the bass is very heavy and low tuned, not always playing its usual support role, it really has its own place and moments to pop up and shine as well. And then the impressive vocals: evil, nasty and mean, making me think of a mix between Schmier from Destruction and Chuck Schuldiner from Death. Sounds pretty good, right? Oh hey, I forgot to mention that the person behind these crazy vocals is Fernanda Lira, a Brazilian beauty with a set of vocal chords many metal dudes would die for to have. Actually, there’s not a guy to be found in the whole outfit with Prika Amaral on guitars and Pitchu Ferraz on drums. I just love the fact that I didn’t even realize this was a female fronted band. I’m really happy to see more and more women popping up in the metal world with vocals that aren’t your typical opera-like clean singing.

As said before, every song has the same angry energy with hints of German thrash bands like Destruction and Sodom, in some songs I can find some Slayer as well (Surrounded by Serpents) and the touches of death metal makes this a really exciting album. There were two songs that stuck out above the rest for me though: Hostages and CyberWar. Hostages sounds like a death metal song when they start and actually has way more of a death metal touch than the rest of the songs. An awesome old school death metal crusher of a song with a crazy guitar shred moment in it. CyberWar starts with a bass line with a very punk feel to it and I’ve been racking my brains to find the song that it reminds me of (still haven’t found it, so if you have any idea please do tell me). Anyway, I’ve been shouting along “CyberWar” quite often lately.

But my ultimate favorite song on the album is Wayfarer. It starts off with some rumbling bassline again, with some great guitar and drum work added to it. But what really surprised me were the vocals on this song. When -I presume- Fernanda starts to sing, it doesn’t sound anywhere near of what we’ve been hearing throughout the whole album. In the first minute and a half she’s singing clean with a wonderful grain on her voice that actually sounds pretty damn close to what Elin Larsson does for Blues Pills. After that minute and a half of unexpected melodic wonder, they bring up the thrash sound again with the harsh vocals and keep this up until Pitchu drum rolls the song to what you would think is the end. But there are still about 2 minutes left, in which those great clean vocals come back to give us an a cappella piece that shows an incredibly awesome, pure sound and great range. Please, I beg you: use that part of your vocals again in future creations now and then…

For thrashers, death metal fans or just open-minded metalheads, give Agony of Nervosa a good listen. These 3 girls are on a warpath and gathering an army of metal fans to make the world tremble to its core. Very impressive stuff that most definitely is worth a 8,5/10 for me. Try to catch them on their European tour that starts in the Netherlands on June 3rd and takes them to several venues and festivals (like Summerrock in Belgium and Tuska Open Air in Finland), you’re most likely in for a blast!