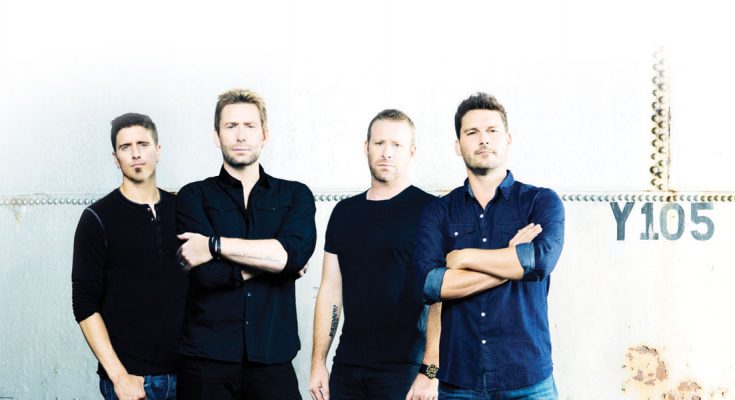 We got ourselves ready for a great night of rocking at the Lotto Arena in Antwerp some time ago. That definitely shouldn’t be any problem with on the bill the Canadian bands Nickelback and Monster Truck, brought to Europe through Live Nation.

Monster Truck (***1/2) was the support band here and the dirty rockers were definitely up to the task of warming up the crowd for the main event. Their set opened with a little intro to set the mood and then they stormed the stage to give us a big serve of rock with a hefty dose of beards, fuzz, rock ‘n’ roll and blues. From the first song Don’t Tell Me How To Live on they already got most of the crowd going and clapping along. No wonder guitarist Jeremy Widerman shouted “I like this crowd!” after their opening song. The American styled rock they bring has a great old school feel with regularly a great dynamic through the use of the vocals of all four the musicians. About halfway the set, during For The People, a guest musician popped up under the form of Ryan Peake of Nickelback. This little taste of Nickelback before their actual show clearly got the crowd going! Jeremy tried to get people even more riled up by shouting “Are you ready for Nickelback?!”. Not happy with the response, he asked for more noise for the headliners.

With For The Sun they inserted a moment for us to catch our breath. The song was a very slow, bluesy song that reminded me somewhat of how Led Zeppelin sounded when doing that. Here keyboardist Brandon Bliss got himself a bit more in the spotlight with a more prominent organ sound mixed throughout the track. A great emotional feeling song that asks for more of this! They quickly moved over to Call It A Spade before we cooled down too much and got almost everyone clapping along again. Really feeling the energy in the room, lead singer and bassist Jon Harvey and guitarist Jeremy ran all over the stage. Having Jon ending up using the guitarist’s mic stand for the first time in 7 years of playing live, if we can believe Jeremy. Righteous Smoke built even more energy up with a pounding drum opening the leading rhythm and a “oh-oh-oh-oh” part so easy to pick up that you can’t help yourself to sing along to it. A simply great band brimming with energy and a guitarist that makes me think of Angus Young with all his running and jumping around. The connection mostly came when he ended up on his knees by the end of their last song, I almost wished he would start to thrash around on the floor while playing a solo…

Setlist
Don’t Tell Me How To Live
Why Are You Not Rocking?
Old Train
She’s A Witch
For the People
For the Sun
Sweet Mountain River
Call It a Spade
Righteous Smoke
The Lion

After Monster Truck, the venue seemed to be filling up to what looked like an almost full house at Lotto Arena. The amount of people showing up for Nickelback looked very promising towards a great hard rock party! Go to the next tab to read about how it went next…

Then the lights went out and Nickelback (****) kicked off their night hard with the heaviest track from the No Fixed Address album: Edge of a Revolution. The crowd clearly could find themselves wanting to be rebellious and a change if you look at the amount of people shouting along to “What do we want? We want change! And how’re we going to get there? Revolution!”… After a short “Belgium! It’s good to be back!” by Chad Kroeger, there was really no time to relax. They immediately set the stage ablaze with a fiercely hot Something In Your Mouth. Clearly not having enough yet, Chad shouted “Let’s get the whole place jumping!”, going head first into a highly energetic Animals. And guess what, everyone was actually clapping and jumping along. The band satisfied, had Chad thanking the “great crowd” and talking about how much better a concert is when it’s on a Friday. Again he called for jumping along on the chorus and tried to get a camera man to “film the fucking shit you guys are doing!” on Too Bad.

The quartet of heavy hitters on the level of energy called for a bit of a breather. That came with a bit of a story from Chad about the next song. First calling to hear from the ladies… calling it the best sound ever. This song was actually for the ladies but… “my friends and dudes don’t want to admit that they fucking love that song. You know, one time I was at a bar and a big guy sat at the bar, looking at me. He came up to me, asking ‘Are you the singer from Nickelback?’. I thought ‘Oh shit, I’m going to get my ass kicked here…’ I still answered yes. ‘Dude, that one song, Far Away, it every time makes me fucking cry!’ Here’s Far Away.” Up went the candles on the big screen and on went the phone screens (ah, I miss the time of lighters being raised) for an emotional moment.

For those in the room not knowing who the guys were, Chad introduced every single one of them. Starting with his brother Mike Kroeger on bass, Ryan Peake on guitars and Daniel Adair on drums. While doing that he went up on the platform behind the drums, took up post behind the mic stand there. They plunged into a bit of nostalgia with Photograph, showing pics of people they met and crazy situations they were in (including some of the guys with their pants down) behind them on the screen. Without any talking the drums went off on their own, soon getting joined by the other guys riffing along on their now switched guitars. They jammed along a bit, gradually transitioning into one of their hits: Someday. Having started the track in a bit different way, they ended it in much the same way in a cool jam. People that still dare to say that these Canadians don’t know how to play, weren’t there…

Everything went dark, the moon came on the screen and they pushed a piano on stage. After some spacey sounds, you got to see Ryan behind the piano and light bulbs coming on the big screen. The mood was set for Lullaby… Having gathered some energy, they set off with Figured You Out during which Chad suddenly threw his mic at Ryan for him to catch it and sing “I love your pants around your feet…”. Continuing with Trying Not To Love You, this time with Daniel on backing vocals, which was a nice change, they got the crowd active again. Right after this song a guy in the crowd was heard clearly with a “Yeah!” which got answered shortly by Chad with “YEAH! I fucking love that dude! Time for some metal!”. On which they stormed into a medley of older songs that would’ve convinced any hard rocker or metalhead… heads were banged and horns raised!

Time for Bradley to come on stage. Bradley is a dude they basically hired for one purpose and one purpose only: bringing alcohol to the stage. After messing around a bit with a very shy Bradley (like pushing him to come and say hi, auctioning him off to the girls in the crowd,…) they chose to play that one song that was used for a super hero/comic book movie: Hero. On the original song Chad is singing with Josey Scott (ex-Saliva), but here the second voice got done by Ryan. To be honest, I liked the original voice more. Don’t get me wrong, Ryan can really sing, but I liked the rawness of Josey next to Chad‘s vocals. Picking up their acoustic guitars, next they brought one of their real “feel good songs”. We Stand Together just makes you feel like you’re not alone and gets you singing along smoothly.

After What Are You Waiting For it was “Time for karaoke!” Real Nickelback fans already knew what was coming, looking at the cardboards jumping up with “I’m your Rockstar karaoke queen!” and stuff like that. Chad tried to find someone to be pulled on stage to sing along with them on Rockstar. He saw what he thought was a boyfriend pointing at his girl, so he decided to ask her if she could sing. After the negative answer of the girl, he told her to get up there… Ryan told Chad that the boyfriend should come along too since he got her in this “mess”. While the 2 were heading to the stage to join the band, Chad noticed that the dude was wearing a Steel Panther shirt. He thought that was the shit, cause he did a song with them some time called It Won’t Suck Itself. They had a bit of fun again with the -apparently just- friends and Chad loved it that the girl, Sara, was apologizing in advance. After they -backed up by the whole room- sang along to Rockstar, Chad said she was great and called Bradley on stage again for some Jagermeister.

Chad said to his band mates “Let’s get them singing” and played the first chords of their breakthrough hit How You Remind Me. Ryan had some fun with the crowd, getting them to sing along with him and the amount of phone screens that got raised went up massively! Once the last notes of this world hit faded away, the lights went off and the crowd went wild. The sound produced was simply deafening and gradually everyone started to chant Seven Nation Army from The White Stripes. This got the band back fairly quickly for a few encore songs. The first one was lead by Ryan, covering the Foo Fighters with Everlong. They had a nice heavy grunge sound, something they should bring out a bit more regularly… back to the roots! Bradley got called on the stage again for shots, calling out “Proost!” to us and with a “Time to get aggressive…”, they broke out into Burn It To The Ground. Which was literally what they did to the damn venue… A great end to a great hard rock show, we can get to looking forward to their next album and European tour.

Setlist
Edge of a Revolution
Something in Your Mouth
Animals
Too Bad
Far Away
Photograph
Someday
Lullaby
Figured You Out
Trying Not to Love You
Flat on the Floor/Woke Up This Morning/Fight for All the Wrong Reasons
Hero (Spider-man theme song)
When We Stand Together
What Are You Waiting For?
Rockstar (karaoke moment)
Gotta Be Somebody
How Your Remind Me
Encore:
Everlong (Foo Fighters cover with Ryan Peake on vocals)
Burn it to the Ground