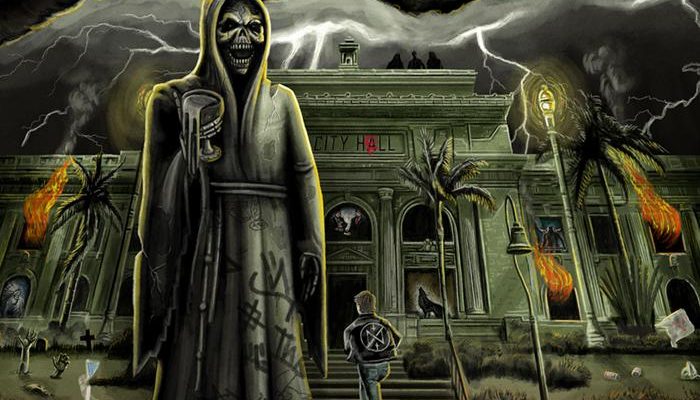 Every style of metal has bands that aim for the lowest common denominator. They specialize in easy-going, catchy music that induces you to sing along, bang your head and throw back a couple of cold ones. What Tankard or Alestorm are to their respective scenes, California’s Night Demon are to the subgenre of traditionalist heavy metal. About a year ago, these party animals released their sophomore album Darkness Remains through Steamhammer/ SVP. As a special treat for the band’s European fans, the label now presents an expanded edition of this highly acclaimed record.

In addition to the original master, this version of Darkness Remains indeed features a lot of bonus material. Hardcore fans will be delighted by the alternate “Bright Lights mix”, two exquisite cover songs, demos and alternate studio versions. Last but not least, the band gives us a track by track commentary of the entire album. Not being an audiophile, I’m not really the man to judge these alternate versions. With all the hustle and bustle of daily life, listening to the commentaries will also have to be reserved for a future occasion. Thankfully, however, I had little trouble digesting both the original record and the cover tracks.

For those unfamiliar, Night Demon play a slightly Americanized version of the traditional metal style developed by 1980s British groups like Judas Priest and Iron Maiden. Back in the day, acts like Omen and Riot were already doing something similar. In terms of riffs, Night Demon clearly wear these influences on their sleeves. A song like “Maiden Hell” is highly reminiscent of Diamond Head’s rock-loose proto-thrash attack. Only the vocals are somewhat diverging from the classic template. They sound unpolished and mellow at the same time. As a result, the frontier with Californian punk rockers (e.g. Good Riddance) becomes blurry at times. Just listen to the ending of “Life on the Run”. You’ll see what I mean.

Luckily, Night Demon also know how to slow things down for an awesome “A National Acrobat” meets “Children of the Damned” approach on “Stranger in the Room”. The galloping “Dawn Rider” is equipped with predictable “Rime of the Ancient Mariner” verses which work surprisingly well with the uplifting chorus sections. The band even managed to craft a fun little instrumental, which sounds like “Losfer Words” and “Flash Of The Blade” crashed into one. If you worship the aforementioned bands, you will eat this up like candy.

As icing on the cake, we are served with two cover songs. The choice of “Turn up the Night” seems appropriate, although it lacks some of the majesty of the original. Jarvis Leatherby is a competent singer, but he’s no Dio. Queen’s “We will Rock You” works better. It’s nice to hear these metalized versions of songs that were not very metal to begin with. Reminds me of Judas Priest, who were really apt at turning other people’s compositions into their own.

While there is nothing groundbreaking to be found on Darkness Remains, it is a highly enjoyable collection of songs. I have no doubt Night Demon play their asses off life, and that is the setting where music of this kind truly comes into its own.

Black will not become a white, it’s all the same

Evil lurks in twilight, dances in the dark

Makes you need the movement, like a fire needs a spark to burn!