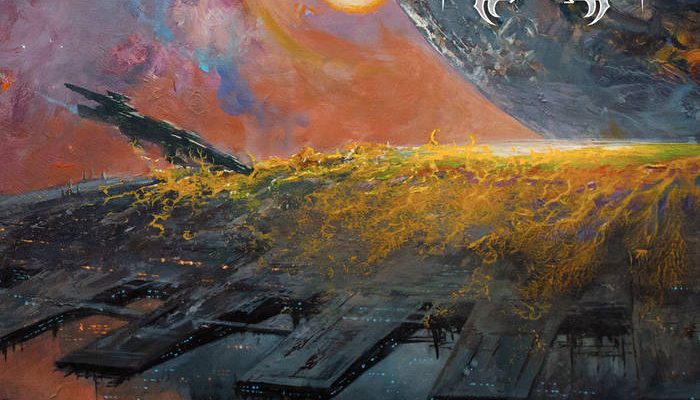 When Nocturnus A.D. debuted their album Paradox last month they continued the legacy of sci-fi death metal. But it seem like there are other bands with such characteristic style of blending technicality and old school death metal other than Nocturnus A.D. After the formal introduction in 2012 of their first full length album Sentient which was released in 2016. Nucleus followed the path of the technical forefathers of death metal a la Atheist. The four piece band from Chicago whose typical quality is themed with space and aliens makes a solid return on the sophomore album Entity.

Over the last two decades there have been a few bands who diverted their interest into science fictional cosmic themes. These bands incorporated different elements and made a legitimate entry into the underground realm of death metal. From the artistry aspect and imaginative characters related to fiction, a new breed of bands established their own musical sense of invention. Odd bands such as Demilich, Nocturnus, Oblevion, and Crystal Age were the first to begin this spatial themes of horror.

The imaginative tales of time travel, space expeditions, and parallel universe were the main topics which reflected on the lyrics. Nucleus aren’t only an old school revivalists, their science fictional themes makes them legitimately unique just like Blood Incantation and Sulphur Aeon. The sophomore Entity is an authentic iteration of the classic death metal bands which I mentioned above. The eccentric opening of the album Arrival begins with strange semi-melodic chords as the music slowly accelerate and shifts into progressive and technical sections. From the tremolo riff arrangements which also feature wavering styles from thrash metal. They exhibit their music through the mid-paced death metal, and dissonant riff work drawing influences from doom metal.

Despite of being known as an old school death metal, the band isn’t trying to sound nostalgic. Nucleus have their own way of experimenting their style, though they don’t venture far away from the old school death metal territory. And as much as I enjoyed the debut album of Blood Incantation and Chthe’ilist, Entity arrives with outlandish and bizarre flairs. However the dual guitars seem to decorate the tracks by adding more peculiarities to the music. More often the guitars weave their technical frills, while the growls are a reminiscent to the growling styles of Demilich. Most of the tracks on the sophomore are based on mid tempo the third track Uplift is more twisted and technical. But despite the variations here and there the guitar riffs sound extraordinary with the alienist feel being the central theme.

There are also influences from thrash metal which are presented with strange solos that gives it an additional charge. The drumming performance is mostly impressive. There is nothing modern about this album those who like old school death metal can differentiate between the retro techniques and the modern style of death metal. The slow morphing into the cosmic atmosphere is illustrated by the odd guitar riffs and deep growls. Nucleus truly understands how to create the quirky feel on the album, the sci-fi themes are elaborated by rhythm guitars and chords.

Approach is a beautiful example of their experimentation, the guitars develops a certain harmony and accelerates into bleak soundscapes and the drum work is the driving force. The direct influences to Demilich and Time Ghoul can be easily perceived through the deep growls which are catchy. Nucleus isn’t an original band but the latest endeavor proves that the band has come up with plenty of ideas and riff modeling. Entity is bold and experimental in the same time, if you divide the musical parts from the fast and the slow moments you can solve the puzzle. Dominion is build on the hazy atmosphere and the utter bleakness the riff arrangements are the most sophisticated layer of the track.

Entity is a strange blend of many complicated elements which are compiled on each other. This is a very odd approach to old school death metal and the closing track Timechasm is another bizarre and technical track specified by the guitar chords. The album has plenty of variations from the slow doom metal style of riffing, this is an extraordinary record and it’s a difficult to listen to. The sophisticated level isn’t necessarily close to Gorguts, the record needs time to be analyzed fully and in my opinion it is one of the good releases of 2019.