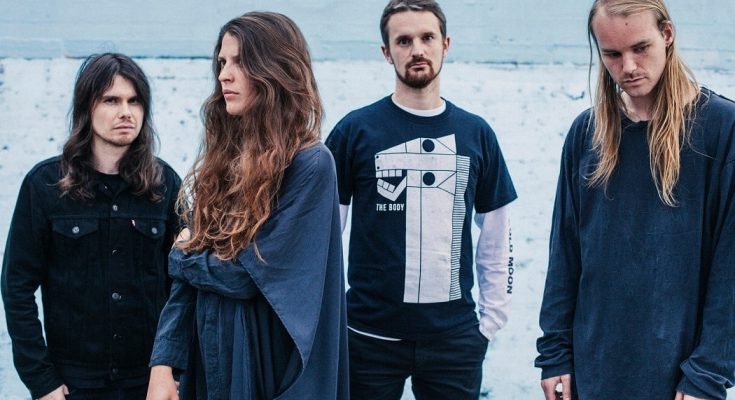 The days are getting darker and colder with winter’s grip getting closer. The perfect setting for an evening of Oathbreaker‘s newest music. Along with Orphan Swords and CHVE they filled the room with a strong and emotional atmosphere. After having toured the US for the past couple of months, Oathbreaker was finally back home. Not much time to rest because they immediately kicked off their European tour in Ghent at Vooruit by Democrazy. I went to take a look and got lost somewhere in that bittersweet sound.

Orphan Swords got to kick things off. The lights turned dark and silence fell as the last couple of people quickly turned their attention towards the stage. A woman in a strange costume got on stage, flanked by her two guardians at their synthesizers. A mask that could have belonged to some Amazon tribe, something what seemed like a ragged dress, and faint glitters. The music started building up and soon she started moving and dancing as if she was possesed by the devil himself.

They managed to create a strange dark atmosphere, it felt like we were watching some ancient, long forgotten ritual but in a modern day setting. I dare to say a musical exorcism because of the lack of any better term. The synthesizers created the main drive in the music. A beating sound that just kept going and changed subtly over time. On top of that were weird screams and noises the singer made. As if some sort of demon had taken over. The result was something different but fascinating.

I did hear some remarks afterwards by people in the crowd. The consensus was that it was something unexpected. It definitely was the odd one in the line-up. Perhaps a bit out of place, seeing how the majority was there for Oathbreaker. I personally liked it and definitely would go see them again if they’re playing in town again. Especially with a similar line-up for an evening of what felt like modern day rituals.

Second up was CHVE (Colin H Van Eeckhout). After the dark exotic sounds from Orphan Swords he brought a serenity to the room. Once he was sitting on his chair and started winding up his hurdy-gurdy, people automatically started hushing each other until silence had fallen. The instruments were covered with a white sheet and images of a campfire with a dark forest behind it were projected on it. His set consists of one song taking control of the atmosphere for half an hour. I’ve seen this set quite some times by now but it still amazes me how fast half an hour can go by. I can write many words about his music and performance but in this case it’s much better to let the music speak for itself. A very strong prelude to the headliner of the night.

Throughout the night we got multiple chances to see the documentary about the making of Rheia. Not a documentary about technical aspects. More of a personal journey and process of how they got to make what became Rheia. It was shot during their stay in the US and gives each member of the band the opportunity to express their approach and feeling towards the newest album. The documentary let us peek into the very personal aspects of the newest album. Which definitely changed the way you listened to their music.

Oathbreaker started off with 10:56 and Second Son of R. Despite the fact that we all knew what was coming the change between songs hit like a train. From the very first notes on, Oathbreaker took our breath and senses and didn’t give them back until well after the show. With Rheia they proved they had found their sound and style. Their performance at Vooruit proved they mastered both studio and stage. One thing is sure, they started off their European tour with a very strong show.

They soon followed up with songs like This Is Where I Live and This Is Where I Leave. Our emotions were held hostage as Oathbreaker unleashed their music upon the crowd. Many eyes shut and slowly nodding along was what many ended up doing. In a sense it was hard to focus on the music and not get lost somewhere in those very strong tunes. The sound was very good and each instrument came to its right during the entirety of the set.

The much anticipated songs Immortals and Needles In Your Skin were saved for last. A wall of sound engulfed us during two of the more prominent songs on the album. The fact that it was all live and that they were only a couple of metres in front of us gave it an extra dimension. After Needles they left the stage, but the crowd clearly wanted more and that’s what they gave us. As soon as those first notes left the speakers we knew what we were in for. With Glimpse Of The Unseen they treated us to one last song from their album Mælstrøm. A fitting ending to a very strong performance, Oathbreaker definitely delivered.

Photos are courtesy of Redbull and Murielle Scherre.

Oathbreaker will play another show in Brussels, 2nd of February at the AB 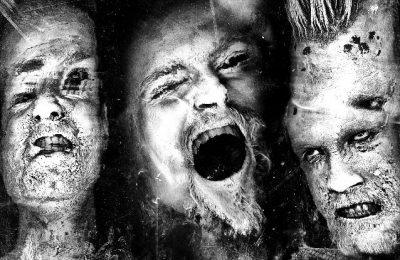 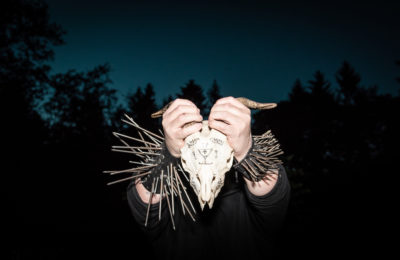 Consouling Sounds announces a new addition to their roster: Ulveblod!