Home Death Metal Obscure Infinity – Into the Vortex of Obscurity 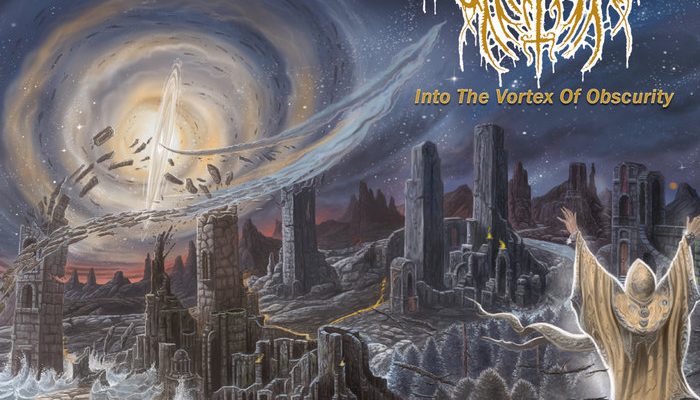 With the second quarter of the year 2019, F.D.A. Records unleash one of this year’s strongest releases in the death metal genre. Obscure Infinity have been refining their musical style with each studio album, the third album ‘Perpetual Descending into Nothingness’ from this German death metal band was an outstanding record in my opinion. But the question is can the band top this album and achieve their goal?  ‘Into The Vortex of Obscurity’ is the fourth album where the band continue to impress. Being longtime devoted to old school death metal, the latest delivery elaborate on direct melodies without neglecting their death metal roots. The new album took almost four years in making, and frankly speaking I didn’t have any expectations regarding this album. But those who had anticipated the return of Obscure Infinity may have predicted nothing but a solid comeback.

The indulgence of old school death metal, and the heavy influence of the Swedish death metal reverberate firmly. The opening track ‘Embrace Obscurity’ is a straightforward brutal track stemmed by heavy riffing and blast beats. Obscure Infinity sounds relentlessly brutal, this track gives us a solid overview of what to expect from the rest of seven tracks. Well at least to me. The German group have strongly built a new formula upon musical variation, and their concrete musicianship delivers some strong material.

Similarly ‘Cosmic Disgrace’ winds up to even more brutal sound, the similarities here draws near the qualities of bands such as Monstrosity. The direction of the tracks have this twisted style where Obscure Infinity change the direction into melodic riffs and solos. Spreading towards the brutal force, the monstrous growls are sufficiently powerful and they’re backed with hammering drums.

There is a fantastic transitioning from brutality to semi-quasi melodies. One of the unexpected traits on the new album is how the band can simply change and adapt to variable musical styles while sticking to the same genre. The third track ‘Grotesque Face’ is displayed with dual vocals, the blackish growls are nicely blended with the death metal growls. The German band simply offers some nifty melodies that sound very catchy. These riffs which are assimilate into ear worm melodies are diluted with the general sound of brutality. Surprisingly the rest of the album takes a melodic direction, the semi black metal style is more expressive.

‘Invoke Deliverance’ manifests the dual guitars and they’re effectively fulfilling. There is a greater sense of elaboration compared to the previous album, as if the band have evolved into progression. The particular quality of the tracks are loaded with excellent technical skills, and the solos on the album are just amazing. The clean vocals along with the strings adds a refreshing air to the track ‘Lighting Spear (A Forlorn Wanderer Part II)’ but they don’t really fit. From the aspect of the musical progression, Obscure Infinity emphasizes on specific technicality.

‘Into The Vortex of Obscurity’ has many varieties the careful selection of the guitar riffs, clean guitars and the solos are approached with a refined mentality. ‘Into The Vortex of Obscurity’ is conducted by technical riffs and they are brilliantly mixed into the melodies, drum performance is top notch and shows a great ability to shift from pacing to fast blasts. ‘Swallowed by Time and Darkness’ is eight minutes long and stands as the strongest track. Played with the technical propensity that defines the latest achievement of this German death metal band.

So overall it seems that most of the tracks on the new album have a melodic approach to them. Obscure Infinity might have released their best album to date. I say this because of the insertion of the guitar melodies and hooks, but for some reason the latest progression has reduced the intensity of the old school sound!