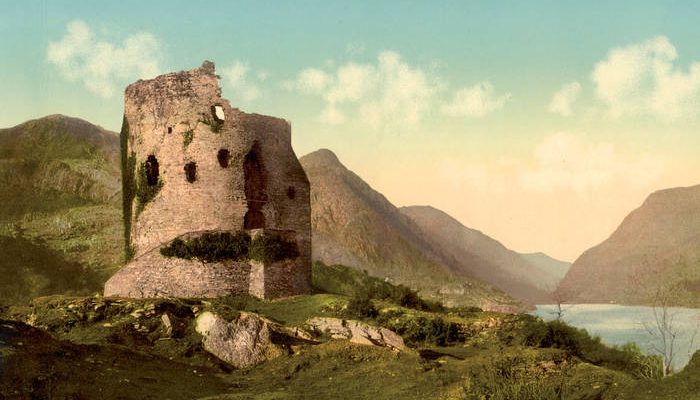 Obsequiae is a prime example of such modulated art according to the Medieval Latin. Obsequiae is a funereal rite of ceremony. The word ‘Obsequiae’ also means obedience and compliance to dutiful service. Formed in Minnesota, Minneapolis in 2007 and now fronted by guitarist, vocalist and bassists Tanner Anderson and Vicente La Camera Mariño, who plays the medieval harp and finally Eoghan McCloskey on drums. ‘The palms of Sorrowed Kings’ is the 3rd output by the trio who found their niche of combining folk music and medieval black metal: from the opening moments of the beautiful instrumental intro led by harp ‘L’autrier m’en aloie‘ to the strong and emotional rhythm guitars of the second track ‘Ceres in Emerald Dreams‘.

The music speaks with aesthetic quality of powerful guitar riffs and enriched melodies that paint a picture of a dramatic medieval castle and monasteries dusted by the bygone era. Obsequiae‘s unique and inspirational music is processed by the simplicity of traditional rock/black metal music. The consequence of mixing different instruments is expressively attained to create an ancient and mystical theme. The refined taste of powerful rhythms on the third track ‘In the Garden of Hyacinths’ is composed of rich elements while the melody is played eloquently backed by echoing black metal growls.

The album is filled with saccharine melodies. The harp instrument is mainly used in the instrumental tracks like ‘Palästinalied’. The trio’s music is saturated by modern musical artistry: for example, the album title track features some clean vocals used as choir to enrich the songs. Obsequiae‘s modern traits focus on the guitar melodies. In fact, the guitars stimulate the melodies of folk music, which is quite unusual. In the sense of quality and variation ‘The Palms of the Sorrowed Kings‘ combines melodies and harmonies into one complex compound.

‘Morrígan’ is saturated by saccharine folk melodies that will overwhelm the fans of folk metal. Almost delicate and sentimental, each track brings in different elements. Therefore, the entire album is quite impressive, dark and evocative to a higher extent. ‘The Palms of Sorrowed Kings’ has some similar qualities and medieval elements which were present on the latest Summoning albums. Therefore this album will appeal to fans of the modern era of Summoning such as ‘Let Mortal Heroes Sing your Fame‘, ‘Old Mornings Dawn‘ and ‘With Doom We Come’. ‘Lone Isle’ is dominated by the traditional style of melodic black metal and there is a charming integration of the dark melodies with the low pitched growls.

The atmosphere here is near symphonic, topped with a medieval fashioned aura. Obsequiae maintains the quality throughout the album and extends over the middle age atmosphere. On ‘The Palms of Sorrowed Kings’ the trio has managed to modulate the rawness of the music. I find the latest output to be very inspiring, in many moments the music comes close to Agalloch. Obsequiae surpassed themselves by the epic guitar melodies and the rhythm guitar is strongly presented.

Every track here contains catchy melodies and hooks. ‘Asleep in the Bracken’ will instantly grab the listener. The gentle soundscapes of the following instrumental track ‘Quant Voi La Flor Novele’ are genuinely mystical and comforting in every sense. ‘Emanations before the Pythia’‘s main feature are the progressive elements whilst the melodies are magical. While Obsequiae is a skilled band, I find the band too carried by the affinity of folk music in general. Apart from the actual songs the main concentration is laid upon the harp instrument. ‘The Palms of Sorrowed Kings’ is an emotive black metal record tuned skillfully to the rhythmic tunes of folk and medieval music.