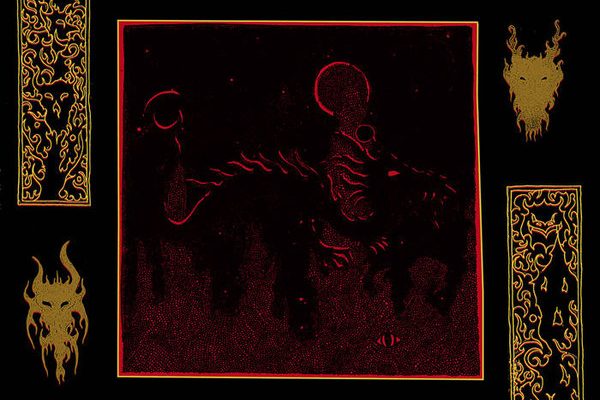 It was back in the mid-nineties when the sub-genre of dungeon synth became relevant to the aesthetics of black metal. Dungeon synth music often creates a haunting display of ambient atmosphere. Its aural and surrounding quality emphasizes a mysterious feeling. While this sub-genre was first presented by renowned musicians such as Mortiis (ex-Emperor) and Pazuzu, the realm of ambient synth back then combined several aspects and was later defined by other musicians. This review brings us close to one of the emerging artists known as The Specter who is the mastermind behind his solo project Old Tower. ‘The Last Eidolon‘ is the latest outing by this enigmatic composer who released his new album via Profound Lore Records on April 24 2020.

The music is based on pure synth work and other instruments such as drums. ‘The Last Eidolon’ builds many beautiful and haunting landscapes, forming dreary images of ghost lore fantasy that evokes a phantasmal feeling as it slowly plunges deep into horror and the occult. The album is divided into three prolonged tracks that will carry the listener into the deep, dark realms of magic and sorcery. Old Tower’s music is saturated with mysterious surrealism that encapsulates a creepy, omnipresent sense of darkness.

‘The Last Eidolon‘ echoes with such ancient and foreboding soundscapes that the music perfectly fits the somber mood of the unearthly, spooky realm of dungeon synth. It creates an eerie atmosphere, giving the album an unworldly experience where the ambient tracks are overshadowed by ghostly images. The Specter has installed an aural kind of magic. With the ominous tone of the synth that descends into deep mist, the music conjures up a shadowy vista of a desolate kingdom that fell under the influence of the malign forces of darkness.

The opening track ‘Loremaster‘ draws its inspiration from the fantasy mood of dungeon synth. The music acts as a portal to horrific landscapes, haunted by sinister beings. ‘The Last Eidolon’ is a dark and medieval-sounding album, based on the fantasy story of an ancient kingdom that became corrupted by its possessor. A kingdom that became deeply influenced by the use of magical powers which brought deception against the practitioner who found himself battling the evil forces of darkness.

The music sprawls over the dark streams and illustrates an ominous atmosphere. It slowly builds on the suspense of the gloomy reverberations. The music depicts many terrifying visions of obscurity in terms of sonic compositions. The Specter captures the aesthetics of medieval and dark fantasy, drawing its themes to create a genuine soundtrack of horror. Its deep and imaginative work is fully arranged by the semi-symphonic composition, despite the eerie atmosphere that revolves around the synth instrument. The Old Tower is seemingly steeped in these atmospheric passages, but it also reflects upon the gothic and the mystical elements of black metal. ‘Shadow over thy Kingdom‘ builds slowly on haunting and foggy, ambient landscapes. It has that forlorn, ghostly feeling that evokes majestic soundscapes, while the overall mood is somewhat menacing and thrilling.

The Specter explores his own world of fantasy work here on ‘The Last Eidolon‘. He binds his creativity and sets a grim and menacing atmosphere. One of the binding compositions of this album is how the synth creates several layers to contrast with horror and pure ambiance. ‘The Fallen One‘ is saturated with the epic proportions of black metal and they beautifully contrast with the rich compositions of the synth. The final moments of this track end with a pure ambiance from the suspenseful choir and bring this album to a grim, symphonic theme.  On his latest installment The Specter brings a variety of horror dungeon synth and vivid fantasy work. This is one of his best works to date.  Recommended for fans of early Mortiis, Old Sorcery,and Burzum.