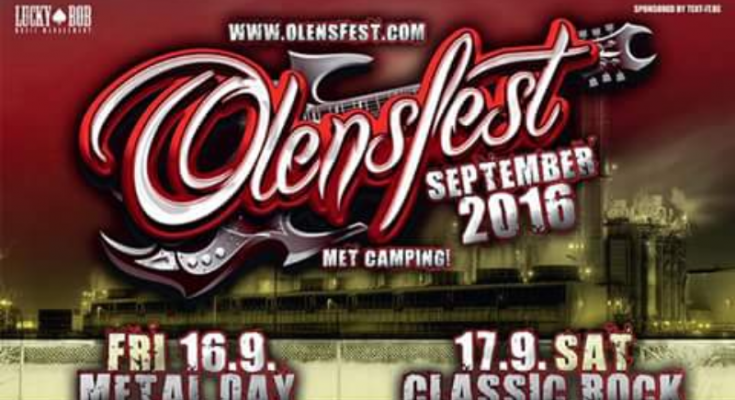 On the weekend of 16 and 17 september the quiet town of Olen, Belgium will witness an allstar line-up of heavy metal and classic rock. On friday the 16th Olenfest will offer you some of the most acclaimed Belgian and international names within heavy metal. The day will start with some of the newest and upcoming talents within the Belgian scene such as Hammerhead, Fleddy Melcully, Turbowarrior of Steel, FireForce and others. The Belgian DJ nutjobs of Goe vur in den otto will also be there to play some of the finest heavy metal and hardrock tunes that have ever seen the light of day.

Then there are of course the big names who are planning to set the mainstage on fire. First up will be Maxxwell from Switzerland. This band will throw you right back to the heydays of denim. The oldschool German heavy metal band Rage has been around for more than 30 years now and are not showing any signs of slowing down. The headliner on friday is none other than the undisputed queen of heavy metal Doro Pesch. The glorydays of Warlock are already gone for a long time but Doro still succeeds in electrifying the stages across the world.

On saturday the 17th both stages will be the playground for various classic rock bands. The crowd will be warmed up by the virtuous stringpicking of Breakfast at Midnight, Scarved, Fenix, Storko, Luke Gasser and Tri State Corner.

At the outdoor stage The Belgian rocker Guy Swinnen can show that there is life after The Scabs with his Guy Swinnen Band. Even though they never got as much attention as their American and British colleagues, The Kids are amongst the top of the oldschool punk scene and will defend the Belgian punk proudness at Olenfest. The British glamrockers of Mud don’t need any introduction anymore. Young and old will get the chance to enjoy their evergreen hits such as Dynamite and Secrets That You Keep. Even after the passing of Darell Sweet in 1999 his bandmates of Nazareth kept going in his honour and they will do just that at Olen next weekend. Chris Thompson is no longer a part of the Mannfred Mann’s Earth Band but he still keeps his solo career running like a train. He will headline the last day of the festival so it can go out with a bang.

Olenfest is about more than just good music though, the festival makes sure to support various charities. This year the profits of the festival will be shared with the “Devil’s rock for an angel” and “Think Pink” initiatives who are concerned with child and breastcancer respectively.