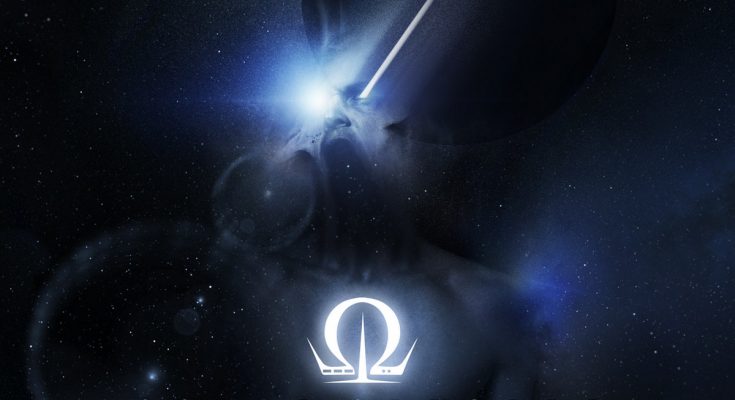 In the age of the second wave of black metal, there are many bands who have achieved the ambiance of the cosmic spectrum. Within the paradigm of symphonic black metal acts such as Odium, Limbonic Art, Sirius and Tidfall, these bands succeeded in creating a palpable atmosphere. Omega Infinity is a new addition to that list. Formed by vocalist Xen (Ne Obliviscaris) and multi-musician Tentakel P. (TODTGELICHTER), Omega Infinity is inspired by 90’s black metal. The thematic concept of the debut album ‘Solar Spectre’ revolves around the mysteries of space, having each track named after the nine planets of our solar system. Through the medium of black metal, the duo explores deep into the cold depths of space.

A fine example of this particular style has been displayed in the past by bands such as Darkspace and The Great Old Ones. And similarly, Omega Infinity harnesses a foreboding sense of darkness. Solar Spectre is a long journey of 48 minutes that will allow the listener to drift into the infinite of the cosmic landscapes. The ambient intro Uranus creates a chilling atmosphere of electronic sounds. Second track Mars shifts between rapid blast beats, whirring riffs and a very fine presentation of ominous growls and terrestrial soundscapes surrounds the music.

The entrancing qualities that featured on Venus uncover the raw and industrial facets of the band. Most of the tracks are layered with multiple alien growls, while the guitars provide a frightening sense of cold ambiance. The music on Solar Spectre is a unique and mesmeric experience. Moving to the fourth track Jupiter where the bizarre industrial elements of black metal are accompanied by choral voices and heavy guitar barrage. Omega Infinity adds a touch of creativity creating a vivid picture of a moving planetarium with choral sections backed by rhythmic percussion that produces eerie atmospheric vibes.

The music channels through the celestial landscapes of ghostly paranormal beings stemmed by pounding drums and demonic reverberations of the droning guitars. The song texture is remarkably layered where some of the musical fragments are reminiscent of the band Samael. Seemingly the duo uses similar techniques to bands such as Darkspace.

There are certain levels of using the cosmic effect of the synth, these common qualities are combined on tracks such as Neptune. Which opens with soaring angelic vocals then suddenly the beautiful angelic voice ebbs and flows. On this track, Omega Infinity achieves a unique and emotional transition that leads the song into a melodic bliss. For instance, the vast industrial elements denote a wider exploration of experimenting with different elements. Saturn clearly shows the influences of the Norwegian black metal band Mysticum.

The focus on rapid drum paces, thudding bass and groove are crafted to align the cosmic themes. Terra has the same sense of creating heavy walls of sound through extreme riffs and pounding drum beats. The guitar resonance and oppressive blast beats become more extreme on the final tracks. Omega Infinity‘s whole craft is based on bridging the gap between industrial elements and black metal. The ingenious ideas of the duo and song arrangements provide a range of dynamic diversity.

Solar Spectre uncovers various facets and explores various styles. Omega Infinity presents a modern style of raw black metal achieved through industrial components. The comparison to bands like Mysticum compliments the raw nature of industrial black metal. Tentakel P. and Xen focus on electronic drumming and fast-paced tempo mostly accompanied by loud shrieking. And the menacing atmosphere of the synth provides many gloomy shades. Omega Infinity‘s debut album is uniquely crafted where each track features thrilling moments and bizarre themes. This is definitely a fresh attempt to industrial black metal achieved through imaginative and innovative use of ideas.