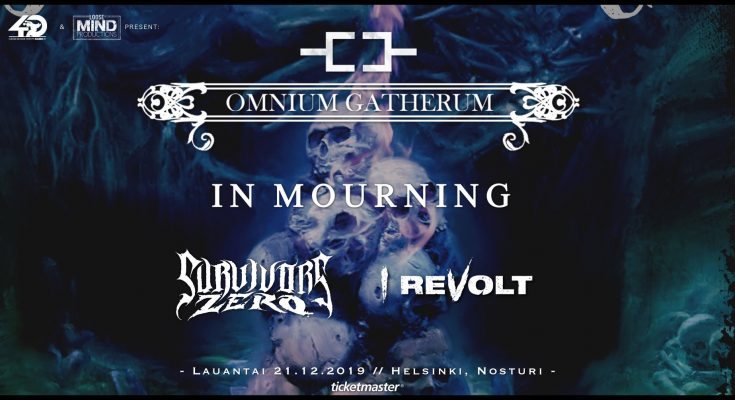 Helsinki is losing one of its legendary venues, a bastion for all that is metal close to the center. Nosturi is closing its doors at the end of 2019 and some people want to celebrate all its glory one last time quickly before that happens. That’s how Omnium Gatherum ended up collecting some of the best that the present melodeath scene has to offer for “One last night of melodic death metal before Nosturi closes”. An event we did not want to miss out on of course!

First up were the locals of I Revolt, who have been around for only a couple of years and released just an EP and a handful of singles. But in their short existence, they’ve already proved to great extent that they are a force to be reckoned with. Every time I see them take over a stage, they play with an impressive attitude and are right in you face. A band to keep an eye on. They will destroy plenty of stages and venues in the future.

2019 marked the return of Survivors Zero to the stages and the announcement of their long-awaited sophomore album to be released in 2020. Clearly a band that couldn’t be missed on stage during this melodeath night. The band played simply a solid show that I enjoyed greatly. Especially vocalist Tapio brought an emotionally charged and passionate performance, going on his knees on regular occasions. He definitely pulls the band to a higher level. I’ll be looking forward to see what their upcoming album will bring!

On a mostly Finnish line-up and the first time they got to play in Finland, the Swedish outfit In Mourning had much to prove. They recently released their 5th album ‘Garden of Storms‘ and after seeing their show, it’s a release I need to check out for sure. A last minute discovery in 2019 for me and a band that impressed me greatly live. They play a melancholic and intricate kind of melodeath metal that reminds me somewhat of Insomnium, but with old school Opeth flourishes switching between harsh death metal and atmospheric parts, adding a certain sad beauty to their music. The energy of this band is incredible and the music is simply captivating. With three guitarists, they manage to bring across a damn full and heavy sound, the vocal harmonies between the guys and those moments where as good as all the members shout/growl the same words through the mics were an absolute blast. A band that should be somewhere at the top of your list if you’re a fan of quality melodeath!

Last but not least, Omnium Gatherum took over the stage and straight away kicked some serious ass. These guys are one of the more popular bands in the Finnish melodeath scene and are an incredible force live. At this point, the only original member left is Markus Vanhala, also known as guitarist supreme of that other Finnish melodeath giant Insomnium, and it’s clear that he’s keeping this outfit alive somewhat to get some more proggy melodeath out of his system. With the more than stellar musicians around him and the charming/engaging vocalist Jukka Pelkonen, they’ve managed to edge a spot in the lists of one of the more unique melodeath outfits out there. And I’m sure we’ll see loads of great work coming from them still in the future!