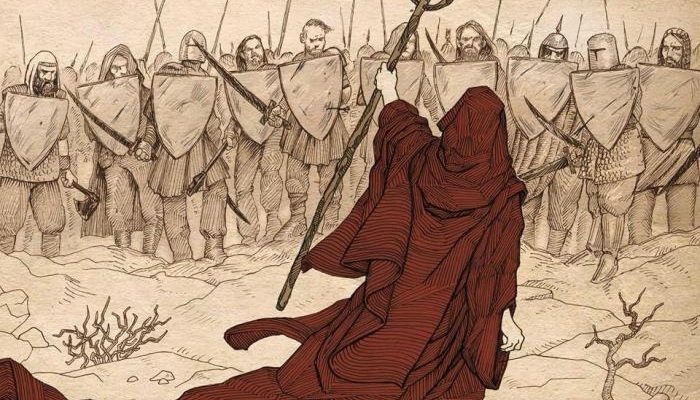 Swedish doom metal band The Order Of Israfel has only been around since 2012 and are now already coming with their second release Red Robes. The band formed itself after Tom Sutton (ex-Church of Misery) and Patrik Andersson Winberg (DoomDogs) met at a Pentagram show where the latter opened with his band. Both clearly have quite some experience already in the world of doom, gloom and stoner and completed their band with two of their friends added.

The first notes you get with Staff In The Sand is a bit of a folk fiddle that sounds surprisingly happy and upbeat. Big is the contradiction then when the actual doom kicks in. The sound of this formation will most likely make you think of a little band called Black Sabbath. Some of the riffs sound so familiar that I regularly caught myself expecting a certain note following like in the Sabbath song I know it from. They still have their own individuality though, The Order Of Israfel is not just a clone of the masters of (doom) metal. The singing of Tom Sutton fits perfectly in the doomy atmosphere with his graveled voice and they manage to keep your attention with their songs. In Staff In The Sand for instance there’s already a great guitar solo to be found that’ll make many metal fans have a bit of a musical orgasm.

Overall the album isn’t just a constant wall of droning doom, they dare to change tempo between different songs and even within the same song here and there. They might not possess the same magic as Black Sabbath in their glory years, but they’re getting pretty damn close to hitting the mark. One proof of their talent is In Thrall To The Sorceress: the guitar riff is groovy, bluesy and the song overall is almost catchy. And I absolutely love how Tom pronounces his lyrics in this song, he actually manages to capture some of the magic and sorcery he’s singing about. Also Von Sturmer is one of those really high quality tracks that’ll make you nod along with your head and has a great (for doom) blistering guitar solo.

Fallen Children is worth mentioning too, it’s a song where they go acoustic with Tom singing with a more clean voice. It’s a really great song that creates a wonderfully calming atmosphere. The song immediately flew into my playlist for “chill-out” music. And right after they shake you awake again with the almost stoner song A Shadow In The Hills. If you don’t count in the minute and a half intro, it’s their shortest song on the album and it kicks ass! A touch of old school heavy metal, stoner and punk on their doom and go!

The closing song The Thirst is a 16 minute long piece of which you’d expect doom greatness with a place to shine for every musician and several layers and tempo changes. But my ‘thirst’ didn’t get satisfied really, the song keeps up a constant droning tempo that seems nice at first but gets rather boring when you keep it up for this long. A bit of a letdown for an album that actually sounds great for the rest. Though I suspect that true doom fans will love the song.

Fans of doom metal that is more than just being heavy and low like the godfathers of metal Black Sabbath or bands like Cathedral and Lord Vicar, will be really happy with Red Robes. The Order Of Israfel is a band to keep an eye on since this is only their second album in 4 years, they might grow to become a big name in the genre! I’m going for a 7/10 for this release.