Home Black Metal Ordinance – In Purge There Is No Remission 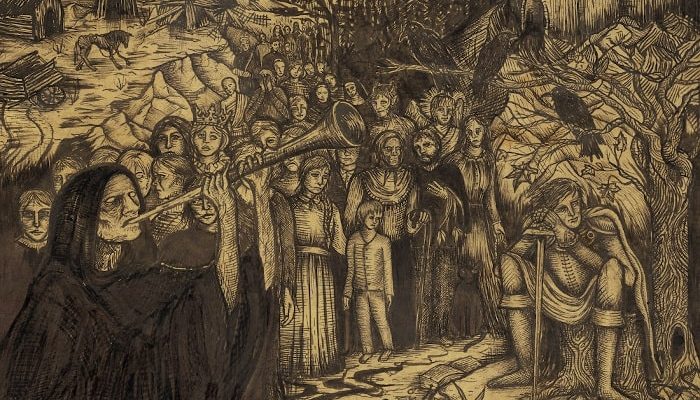 From Helsinki, Finland comes the sophomore release of the black metal outfit Ordinance. The newest release ends the long gap of silence since the debut “Relinquishment” which was released back in 2014. The virtuous lineup features drummer Lauri Laaksonen (Convocation, Desolate Shrine) and multi-instrumentalist Arttu Ratilainen (Flauros, ex-Alghazanth). “In Purge There is no Remission” offers many surprising and inexplicable twists which the band somehow manages to combine. The guitars are loaded with powerful riffs and supported by impeccable drumming performance. On this album, the duo goes beyond the traditional sound of the Finnish black metal and at the same time reveal some bombastic elements. What truly makes the album so attractive is the bewitching melodies of the lead guitars that show a visceral ability to alter the traditional form of black metal.

From the onset of the opening track “Obstructed Paths” the duo channels classic trademarks. “In Purge There is no Remission” is rooted in the idiosyncrasies of the Finnish black metal but it also manages to ascend further. The drums erupt with rapid power whereas the guitar arrangements provide tremolos and some acoustic guitar passages. Ordinance builds memorability and the guitars strike with a blizzard of violent riffs. A meticulous amalgam is displayed in the most hellish forms of black metal. There are some majestic samples of trumpets and synth that provide a gloomy tone while the slow gait of the drums allows the melodies to shine. “Diabolopathia” showcases the catchy compositions that are weaved by coldly tingling dissonance. Undoubtedly the band has generated a demonic feel throughout the album, taking their craft to the highest levels of orthodox black metal.

There are certain moments when the drums increase the pace and the tempo becomes enraged by the ultra-blast beats. The duo shows a good balance in shuffling the pace either by moving into heavy guitar paces or by giving the atmosphere fair moments to shine. With layers of focused synth the duo creates a sonic cacophony where there is some kind of alteration between other instruments like the guitars. Ordinance‘s musical patterns are very intriguing, you’ll experience many twists and sonic complexity. “In Purge There is no Remission” is an experimental maze at times. During the first tracks the direction proposed a certain notion of raw black metal but later the remaining sets of the songs proved otherwise.

While the riffs are amplified by dynamic guitar performance, Ordinance explores the sonic platform of modern black metal. On tracks like “Gathering Wraiths”, the storming barrage of the heavy guitars and drums is brought by the prowess of the duo. The songs are quite decisive in terms of the visceral musicianship, where Ordinance gives us a broader spectrum of creativity. On many occasions, the hypnotic effects of the guitars and synth blend well together, giving a sense of innovation.

“Credo Sceleratum” shows the ballsy traits of the band that somewhat stray away from the traditional trends. And while these dynamics are widely separated from the traditional style, the duo finds intricate ways to blend the songs into a cohesive experience. Ordinance‘s undisputed take on black metal is quite challenging and daring. The drums for example never abstain from pounding hard while the fierce tone of the blazing guitars builds massive mountainous riffs. “The Kingdom of Nothing” boasts potency to the riff craft and the intricate work of drums is brought by fast sets of tempo. The album’s strength lays within the masterwork of the individuals who have managed to create a spacious and complex piece of orthodox black metal. Musically Ordinance comes along the lines of acts like Craft and Armagedda.

“In Purge There is no Remission” is a great alignment of modern black metal that meets old school. Verging into raw black metal, the grim sense of vocals on “Gesticulation of Death” paints bleak picturesque of desolate landscapes. Dimming into almost twelve minutes of the final track “Purging Kremanation” is an epic closure of sheer magnitude. With drums blasting in fury, the minimal use of the synth and the focused tremolos maintains a dark atmosphere. Fans of orthodox black metal will find this sophomore release very intriguing due to the unique portrayal of ideas.