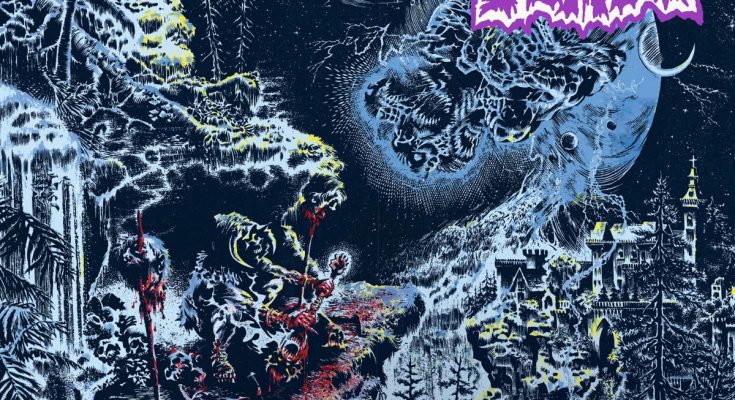 Canadian old school death metal band Outre Tombe smite hard with their second outing entitled Nécrovortex. After a three year break the trio once again unleash their buzz-sawing cannons of hell and present their latest record with stomping metal riffs of 80’s and 90’s retro death/thrash metal. Being one of the most impressive bands to rise from the Canadian soil Outre Tombe has not only succeeded to bring the quality of riffs, but they have also made it clear that their direction towards metal is quite firm and consistent.

As a band they show many influences from the classic acts such as Slayer, Bolt Thrower, and Death by cementing their musical style to the law of old school institute. Therefore you are going to be blown with the madness of the menacing riffs which are plenty on this record. With the blazing opening La Crypte, Outre Tombe erupts with speedy solos and infiltrated riffs of the raw kind. Drums are active and focus on double bass by finding the right mix of sound with thrash and death metal.

Aberration engages into the classics of the 80’s metal and captivates the morbidity of death metal in its wholeness. It is affirmative to say that the Quebec lads are capable to match the sound of the classic sound of 90’s era. Necrovortex is a rudiment record and has this brutish flavor, vocalist/bassist Crachat has a similar growls to Chuck Schuldiner, all the tracks on this album are sung in French language. Concile cadavérique conjures some chaotic solos and they’re amazingly played by the new guitarist Desastere. The man behind the drums is Vitesse and he batters them with force, basically there aren’t any slow moments on this album, Necrovortex just kicks right in the face! The elementary principal are observant straightforward and unique, not many bands have trodden into this path but Outre Tombe are more than that.

When you listen to the new Outre Tombe album you can hear the old school vibes from bands such as Aspyhx, Dismember and early Pestilence. The tracks have this crude flavor to them, but the French musicians have a great ability to refer to these riffs and to connect them with a different guitar tonal. As much as I enjoyed their debut album Repurgation, Nécrovortex is a very crude and vital album it has more diversity in the music the riffs are more jagged and not refined. It also possesses the spirit of the 80’s metal and by that the Canadian lads exhibit an excellent precision throughout the album.

The cover art is very colorful and it’s been beautiful depicted with an artistic standard. Concerning the guitars they are very much distorted boosted with rotten riffs which gives the songs a perfect vibe. Also there are slower mid tempo parts which can be heard on Hecatombe II, while Hecatombe I appeared on their debut album. Well this track has a doomy vibe which is cloaked with an atmosphere of a slower tempo. Aggression is another factor which makes this album intensely raw and morbid in the spirit of the old school, and when I say old school then I also mean the Swedish death metal style the ones with heavy fucking chain-saw riffage!!

You will also encounter many breakneck solos on the track Nécrovortex, yet this also can be applied on the rest of the tracks which are fulfilling and changeable. Outre Tombe scaled down their melodies, there are some grooves on the self-titled album, but over all the songs are raw, harsh, straight forward and unsophisticated. Vengeance Spectrale hits hard with strong riffs and pummeling drums building upon energetic and violent feel. Ronge par les Miasmes starts with a barrage of storming riffs, not many bands can perfect the primitive death metal style but Necrovortex is entirely a greater album than the debut and contains many killer riffs and nasty solos and they are delivered in the style of Slayer.