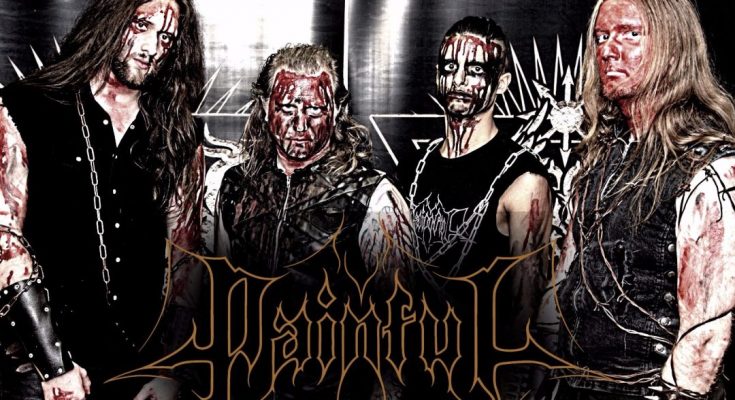 Wednesday 27th of July 2016. What a day, what an excitement, what a band. The opportunity arrived to interview Painful, a black/death metal band from Germany. The unexpected highlight of the interview was… near – ALL members were present!

Before the start of their show, Painful posted a picture on their facebook page to show the enthousiasm playing on Metaldays. Thank you Mike (vocals), Axx (bass), Mucha (guitar), Dane (drums) and Kim (guitarist) for your time and the pleasant talk. 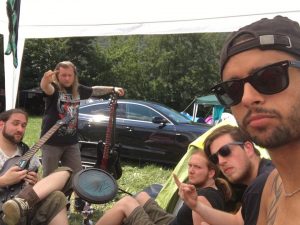 Metaldays Slovenia. What do you guys expect of playing here on stage?
Dane: I think for us it will be a great experience. We have several gigs but playing on Metaldays will be a cool thing for all of us. It’s a big stage, it’s a cool audience. I think we’re going to have a good time here.

I wondered how the name Painful was chosen.
Axx: It was in 2004. I’m not sure. I was looking for a good name. Some times of my life were not so good and I think that was the inspiration for the name, and the lyrics too.

I did a review of your latest album ‘Imagine Pestis’. The subject is so heavy and loaded. It is weird for you guys to see people dancing and having pleasure with such a theme?
Mike: I was always thinking “how do we get the people to scream…”
Dane: Yeah! Black, blood, death… [laughing]
Mike: It’s probably the melodies and the song itself that cheers the people up. But I think when they read the text, they might recognize themselves in situations. They might think ‘Oh that happened in my life’ and so they have a real connection to that.
Dane: Someone is happy about it ’cause they know there is someone that thinks “there are people like themselves” or suffer the same problems but they can speak it out. They read the text or listen to the songs and think “that’s it”. That can be the connection with the themes even as brutal as black and death metal.

You have three albums so far. Are you thinking about new work?
Mucha: We are hoping to record it next year, busy working on new stuff but it’s not ready yet. The first two songs are incoming.

What is your inspiration for the new album?
Mucha: I’m new since 2015. In November I joined the band and Kim joined since three months. It’s the first time that Painful had two guitars. We want to try something new.
Dane: Yes we would like to do something very new. Maybe it’s a little experiment but we all decided that we have to continue our work. We are going to do it a little more difficult, little more extreme and with two guitars it’s something different for sure.

How did you come together: you knew each other from advance like friendships, you heard of qualities?…
Dane: First of all we have to say that he (refering to Axx, FYI), is founder of the band. Some years later Mike was entering the band and I am in the band for like three years. As I said we were trying to do something new and with the two latest members we will have that.
Mucha: We kind of already knew each other. A friend of mine came to me and said “they search for a guitar player who can jump in”.
Kim: Someone gave me a phone call to ask if I was interested to.

Mucha and Kim, how was it for you to begin? I can imagine it’s not easy to go with the flow and practice is required.
Mucha: It was not that easy but the men are very friendly. There was a nice atmosphere so it felt good to jump in.

If you had no future as a musician, which job would you exercise?
[They think about it for a short period of time].
Dane: What would our dream be?
Mucha: Beer!
Mike: Travelling the world as a photographer. That would it be for me so when I’m 80 years old I can look back and say “I have seen the world”.

For you as the founder of the band (directed to Axx), how is it to cope with all the changes and take the decisions?
Axx: Our first singer died. We searched for a new one. That period was a very hard time. We were not so happy about some things. The last guitarist was going to another band. But I am happy with “now” These guys are the best musicians. It’s a heavy question for me.
Dane: The band had a difficult time. It was difficult to continue our work but then we had special events and good times where we thought “we would be stupid to not continue playing our music”. So this was always the stronger part of the band.

In the nearby of further future, what would you guys like to achieve?
Mike: Playing on MetalDays was one goal.
Dane: Touring Europe, touring USA…
Mike: Touring with a bigger band as support, that would be awesome.
Axx: Playing at Summerbreeze will be nice.

Now a random fun question: If you were to be a superhero, which power would you possess?
Mike: That’s a heavy question, I would have to think about it.
Mucha: That’s easy. Beer!
Dane: I would like to change the world. A world where there is no suffering and terror. You know I’m from Germany and the past weeks, a lot of bad things happened. Terror acts like people killing other people. If I could do it as a superhero, I would tell them it can’t be.

One last question. You know I’m with GRIMM. Would you like to give a message to our crew?
Mike: We would love to play there.

You never played in Belgium before?
Dane: No. Everywhere around Europe but not in Belgium.

You (directed to Mucha) should check it out, we have awesome beer there!
Mucha: [Laughing and joking about it].

After the interview itself we talked about preferences (playing in small clubs or big festivals), beer and perhaps the chance of having them for a GRIMM event. A big thanks to the band members!