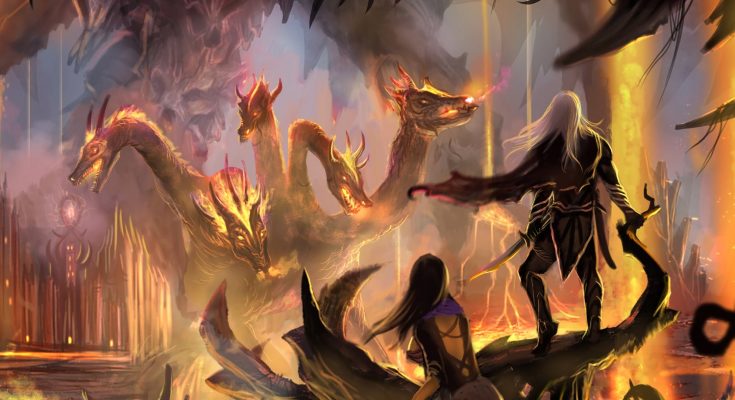 ‘Entering The Abyss’, the second album of the Greek band Paladine, starts with an explanation of the story we are in. Our main character Raistlin is telling us he wants to become a guard, one that slays dragons and such.

‘’Soon, very soon, I will challenge her. Look through the gate, only fire and dust. And pain. Hear the growls of the demons, feel the wrath. I will tear down her five dragon heads to the ground. One by one. I will become a guard. Soon, very soon’’.

‘War of the Lance’ kicks off with a minute long of instrumental guitars that give us an interlude to the magic that’s going to come. The harmonies on the chorus are truly beautiful with the backing vocals and lead singer Nick Drotonotarios on top. Fast heavy metal guitars and riffs filled with power chords will guide you through this story.

‘Between Gods and Man’ gets you headbanging straight from the start. Again, we get an awesome instrumental, minute spanning intro. If I say this intro would be an excellent Guitar Hero song, you’ll probably get how it sounds. Once more, the harmonies in this are astonishing. Be ready for the battle to be unfold. In this song, we also hear the name Paladine as a character for the first time. Paladine is the God of Good and Justice in the Dragonlance books, written by Tracy Hickman and Margaret Weis. The concept of these books was written while playing a Dungeons and Dragons boardgame. This album and their previous album ‘Finding Solace’ was inspired by the story of the books.

I love how this album creates such powerful images with music. The intro of title song ‘Entering the Abyss’ just has this chill to it. You know something is about to happen. It’s eerie. Then, the thunder strikes and the electric guitars come in.

Paladine has this formula where they start their songs with instrumental parts. These parts get you in the right mood for the song to come. It makes you engage in the story. Harmonies are also a big part of this album. It creates this feeling of a big mass of power just slamming down everything that is in front of them. A very strong album with a story to get lost in.

The album cover, created by Jimmy Ling Dreadjim, shows a moment in the story where Raistlin is about to slay the five headed dragon, just like he foretells in the beginning of the album.

‘Hourglass in the Sky’ is an extremely fast one. The vocals are darker and more raw. It almost has a tiny bit of a thrash metal vibe to it. I love how Paladine succeeds in letting the music speak. Their formula throughout the album remains the same. First it starts with an instrumental part, then the song kicks off. But each song really has its own character. Each song speaks for itself. Maybe this sounds strange since this album is a concept story. But each song is a different part of that story. This is clearly done by the music speeding up or slowing down with the vocals being either rougher or more harmonized.

A perfect example of this is ‘Brother against Brother’. This song has a beautiful acoustic part near the end. When the vocals kick in, the music gets fast and powerful again. The last few seconds of the song end with a beautiful classic guitar sound. These are pure emotions.

‘River Of Souls’ gets to close this album. A beautiful classic part that lets you calm down from the adventure you just went on. At the end it uses the two sides of the earphones really well when the guitar slowly fades away.

‘Entering The Abyss’ has been an hour long adventure. Even though the lyrics aren’t always clear to hear, the music takes you to the places it wants you to go. For me personally, I like to read along with the lyrics as I hear them being sung, especially with story albums like this. That way I can get a better understanding of the story. Unfortunately, at the time of writing this, not all the lyrics were available to me. So that part is up to you, the one reading this. 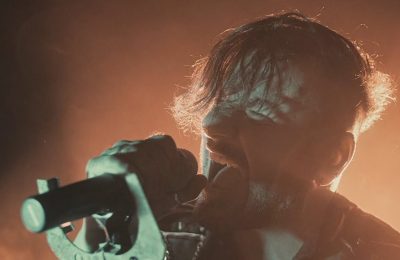