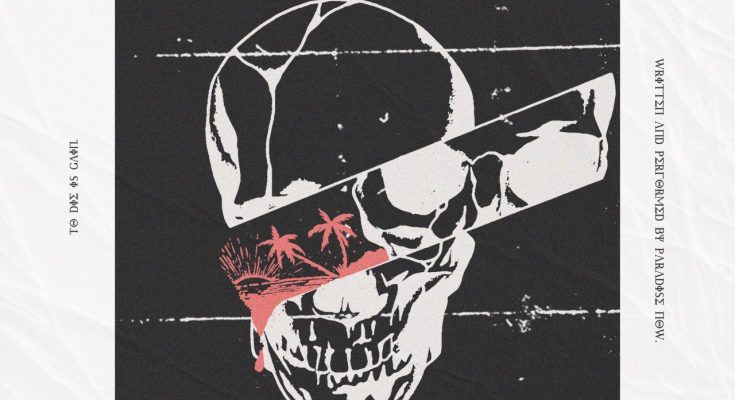 Paradise Now released their debut album on label Tooth & Nail records on July 30, 2021. The brothers Sam and Ben Taylor, together with best friend Nathan Beaton, created this Alt-Rock universe where anything and everything is possible. Sometimes the music might make you daydream, or sometimes the lyrics grab you so that you’re doing the opposite. Enjoy this album full of new experiences.

‘Bring Me His Head’ starts off with a tune that gets you calm and ready for the breakdown that follows a few seconds later. The bass leads the way in this song. Paradise Now keeps the vocals on this song rather pulled back and let the music do the talking. If you listen closely, the instruments and the way they are used change a lot in the background. The song ends the way it opened: We get one more breakdown and a chill tune for a few seconds at the end to cool down.

‘Haunt Myself’ has more of a punk rock vibe to it in the intro and the chorus. The verses are rather calm with palm muted guitars in the background.

This is the lyric that haunts me the most in this song. A feeling that a lot of people can probably relate to.

‘Supernatural’ blasts in with a single string guitar line, followed by a verse played by the drums (Nathan Beaton) and bass (Ben Taylor) and sung by lead singer Sam Taylor. This riff comes back every time after the verses. The breakdown on this song sounds absolutely killer. Pressure is build up by this guitar riff, then, it’s just all out.

This is a line in the beginning of ‘Heaven Close’. It returns a couple of times in the song. What does it mean? It could be taken literally, or it could be a way of expressing how to live your live. Do you want to feel alive? You might need to break a couple of rules to do so. Or do you want to follow the rules in life and just be like most people? The song has this mysterious tune at the start, which sounds like being in a daze, if being in a daze had a sound. The verses take it calm, having this daze sound on them. But the chorus goes all out with distorted guitars.

‘I Hope It Never Ends’ has a calm disco vibe to it. The use of the synthesizer really builds the song here. The beat builds up after 30 seconds and then it’s back to distorted guitars in the choruses that go all out. The last breakdown sounds amazing with all these sounds combined.

‘Monsters’ starts off with a sound that sounds like somebody covering the microphone with their hand, then this sound transforms into something that sounds like it’s played backwards. This then evolves into a song with many different sounds that are unique and hard to describe. It creates a mysterious vibe throughout the whole song. ‘Baptist’ spirals at you with this looping sound, then it blasts distorted guitars at you. All of a sudden, almost everything is gone and all focus is on Sam singing. Then all instruments come back again. A heavier song on this album with a more up tempo vibe.

Title song ‘We Never Die’ is the heaviest song on the album. The song has one loud and clear message: we never die. A song about not giving up, no matter what is in your way. Even though it might be though, you will get there.

Paradise Now has a clear formula for their songs. The verses are often calm and soft, while the choruses are loud and distorted. While the same description can be used for the songs, they definitely aren’t the same. Each song takes you by the ears and tells you its story. By changing the pace in the same song many times, it creates an extra dimension. A dimension that’s an iconic sound and what makes you recognize the artist immediately. You just can’t put a label on this. I’m going to try though. It’s a mix of metal, rock, pop and synth. Smash that all together and that might be what best describes the music.