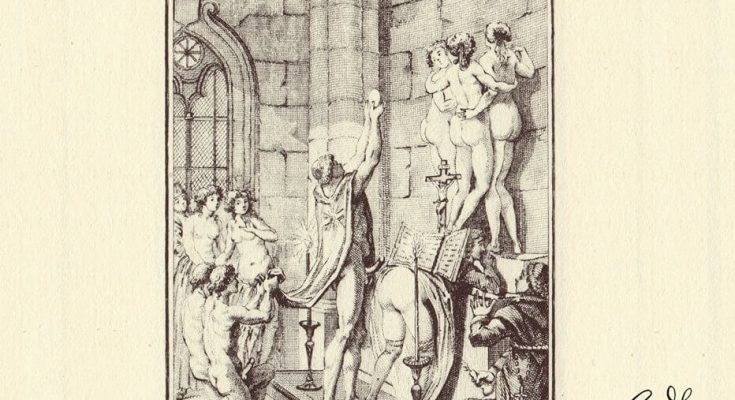 Hell must have frozen over. Thirteen years after the release of To Gaius (For the delivery of Agrippina), Paragon Impure reveals their long-awaited second full length. As far back as 2008, the band started writing a successor to the – heavily praised – debut, yet discontentment about the result made sure the music, recorded under the working title The Fall of Man, received a one way ticket to the trash can. That trash can however seems to have been more of a fridge, since Sade is a revision of the old, thawed concept. Of Virtue and Vice is the sub-title, so the album is – for those who weren’t aware yet – a homage to pervert extraordinaire Marquis de Sade.

Contrary to the Roman thematics of the debut, Paragon Impure offers descriptions of sadistic and pornographic works and the life of the most notorious figure from French literature. Contrary to To Gaius, which sounded pretty straightforward and was a homage to the sound of Darkthrone-classics such as Under a funeral moon and Transilvanian hunger, Sade has been blessed with a more modern sound thanks to the mixing skills of PJ Turlinckx (A Thousand Sufferings) and Jérémie Bézier (Emptiness, ex-Enthroned) who took care of mastering duties in his Blackout Studio.

Musically speaking we hear a slight, and maybe more accessible, Deathspell Omega-like dissonance in the guitars, without getting lost in all too complex technicalities. The hate that previously characterized Noctiz’ vocals seems to have lessened in favour of more variation in the vein of modern orthodox and occult black metal bands such as Ofermod and Mortuus. There’s also more room left for ‘musicality’ contrary to the constant blastbeat assault that was the debut, which already becomes clear in the opening track Introduction to the Divine Marquis. This increase in musicality however doesn’t affect the overall pace of the album, since Paragon Impure still punches hard and fast yet never spins out of control due to the tight drumming of Svein (Lugubrum).

The first few notes of the nine-minute long Juliette, Queen of Vice already raise the bar of a song that exhibits strong dynamics and a few neat guitar-loops. With Mors In Excelsis Deo, Paragon Impure initially reawakens the spirit of the debut album, yet becomes musically more diverse and concerning Repentance of a Dying Libertine, there’s a lot of hidden elements to be found in the background of the sonic landscape, pushing the track to newer heights. The most technical/progressive track then would be Philosophy in the Bedroom, which exudes a certain thrash-vibe, contains a lot of melody and reserves striking role for the bass guitar, sounding almost sterile. The Final Passion, or the Passion of Hell concludes the record in a masterful way. Prime instrumentation and breath-taking passion fill up twelve minutes of unbridled aggression and haunting and dismal subdued passages.

Thirteen years after the release of one of the best Belgian black metal albums that ever saw the light of day, Paragon Impure strikes back furiously. The simple charge-attack-obliterate approach that characterized To Gaius! has been replaced by a more melodic and orthodox approach to the genre. Make no mistake however, since Paragon Impure did not lose their hateful sound. The fact that Ván Records decided to release this highly anticipated album probably says more than I ever could. Maybe not all 90’s black metal purists will like this album, but then again: Noctiz himself wouldn’t give a shit, and neither do I.