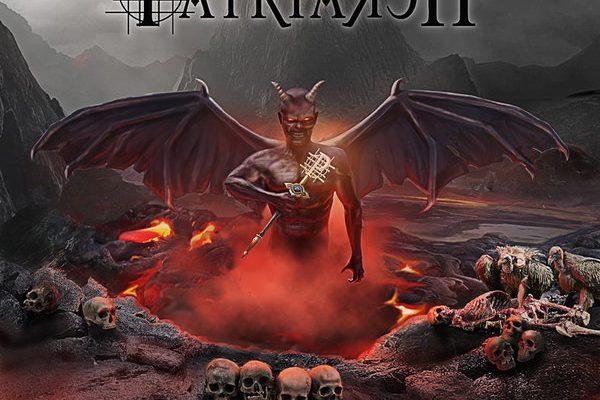 PatriarcH is a Belgian band that exists already over 20 years and somehow they never caught my attention. Before they went by their present name, they were known as Pariah from 1983-1988. After an unfortunately losing their bass player (R.I.P.) and 2 more bands living under the same moniker, in 1988 they decided to switch to PatriarcH. Going through their further history is seems they’ve been plagued by regular line-up switches. The one constant though seems to be one of the guitarists, Freddy Mylemans. Knowing this, it’s not very surprising that he has his hands in every single song on their recently released album Rage of Gods, either writing the music or the lyrics or both.

The music on this little disc is a very digestible blend of thrash and power metal. They actually lean even a bit more towards the thrash side with the combination of the great heavy riffing, the often very fast-paced drums, very fitting solos and vocals that range from melodic singing to shouting. I usually very easily lose my attention when listening to a power metal record, but they managed to put enough of an edge to the sound that keeps me invested. I don’t think there’s one song that doesn’t have several tempo changes, it makes it all very interesting and exciting. You can clearly hear that every single member has tons of experience in their music. With a special mention of Ruben Mylemans, Freddy’s son who jumped in to record all of the drums except for one after they parted ways with their drummer. Personally I’d have kept him in the band just, cause he did a damn good job. But understandably enough, when one of their old drummers (Luc Seeuws) offered his services, they went for him. Just in time to record drums for The Red Cord, to have at least some input in the new record.

There’s quite a few of their songs that are my favorites of this album. There’s Born Without a Face, By My Forbidden Words and Disclosure that are in a more fast pace and remind me a bit of an older Metallica at the end of the eighties, beginning nineties. The Red Cord feels very heavy and damn groovy, I was banging my head along almost immediately. I also very much like the little grunt here and there in the song. My most favorite song comes near the end of the record: Chronology. A song that goes from acoustic sounding guitars with melodic and beautiful vocals (by Kevin Vangelooven) to heavy riffs with really strong vocals that range between low shouts and the high pitched kinda sound you hear a lot in thrash lately. This is a really strong song in my opinion. One track that I didn’t get what its purpose was, is Into the… I know it’s the intro to Neverwhere, but as a separate track it seems a bit out of place to me. It does create a nice atmosphere with the spoken-word by Laure Mylemans (yes, Freddy’s daughter), but I can’t see myself picking that one out someday to listen to on its own.

I’m happy to have discovered this little treasure that Belgium has to offer. I think they definitely deserve some more (international) attention, so metalheads and labels across the land: check them out! This is very enjoyable thrash/power metal with quite some hints of Iced Earth and similar artists. I’ve ended up with 7,5/10 for this effort.

Release date: March 5th, 2016
Label: independent
Tracklist:
1. Rage of Gods
2. Born Without a Face
3. The Phenomenon of Thoughts
4. Into the…
5. Neverwhere
6. The Red Cord
7. By My Forbidden Words
8. Chronology
9. Disclosure
10. The Sealed Tongues of Wisdom