When we see a band releasing a beer in cooperation with a rather commercially oriented company, our hope for an actually great beer takes a bit of a hit. In this case it's the limited release of "Grale", a Scottish ale/wee heavy brought on the market for Ghost by Nils Oscar Brewing and Brands For Fans. So with somewhat reserve we approached this brew for tasting...

When pouring this wee heavy into the glass we get a dark brown color with a red shine and quite firm beige head. The aroma talks of figs, loads of roasted malts and has a touch of citrus at the end. The first flavor we get when we actually taste the beer confirms the presence of a lot of nicely roasted malts (which is not too surprising with the use of 6 different malts). A little sweet touch is present from caramel flavors without it getting too overpowering. The figs of the aroma return in the company of ripe red fruits and a hint of chocolate. In the finishing touch there's a bit of citrus coming up together with some floral hops. You still get a little hoppy bite of bitterness and pine (again, not a big surprise since they used 4 different hops). The mouthfeel of this beer is rather pleasant with a creamy yet very smooth experience and just a little bit of carbonation! Overall a really decent beer with a great balance, a nice surprise. If there would be one more negative remark we'd have to make, it would be that for a wee heavy the flavors are actually really mild. All of the traditional elements are there for it to be a wee heavy, but it feels a little bit like the brew is holding back. 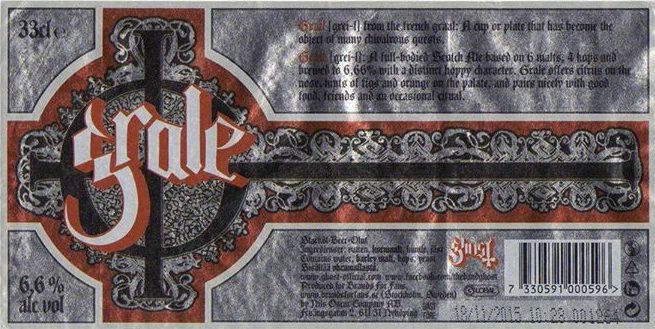 The packaging of "Grale" reminds us somewhat of a similar rendition for Slayer's "666 Red Ale" (for our article about that one, go here): a quite stunning label that perfectly fits with the band for who the beer was made. You can see the well-known upside down cross "G" logo from the band going along the length of the label with silvery and red decorations around it. On top of the logo, there's the name of the beer in the same font as Ghost's band name. When we go more into the details we could read the following in Medieval styled lettering:

Grail  [grei-l] from the french graal: A cup or plate that has become the object of many chivalrous quests.

Grale [grei-l]: A full-bodied Scotch Ale based on 6 malts, 4 hops and brewed to 6,66% with a distinct hoppy character. Grale offers citrus on the nose, hints of figs and orange on the palate, and pairs with good food, friends and an occasional ritual.

As you can see, they know how to sell their goods. It's informative and entertaining at the same time with a little wink to the overal themes of Ghost's music.