We at GRIMM in general and Pick Your Poison specifically can enjoy a good beer (or two, or three,…) and we love a good (un)healthy dose of rock, punk and metal. So if a festival combines both our vices in a day of exuberance we tend to get really enthusiastic. So instead of waiting until the 25th of August when the Razernij festival takes place in Rumst, we decided to contact to organizers early and try to learn a bit more. Be sure to read through the whole article, it will be worth your time!

So, what is Razernij actually? Is it a beer festival or is it a music festival?

It is both. We are all fans of heavy music and for most people going to a concert also means having some beers with the friends. The world of beers has drastically changed over the years. Like in metal and punk, all limits are off. Brewers these days go far beyond pilsner beers and Belgian style specialty beers. And there are plenty of people out there interested in tasting/testing the new beer styles. Oyster stout, chocolate quadrupel, tea or whisky infused saisons, sheep dong smoked beer, the use of exotic hops aromatic and/or bitter, barrel aged beers, the revival of the sours, … there is something for everyone’s taste. To ensure the best possible match with the music we only look for brewers with a ‘rock’ attitude. You can see where there heart lies by looking at them, at the name of their brewery, their logo or their beer names.

A good beer is better enjoyed with some great music, preferably loud and heavy. A good concert should offer decent drinks. That’s our concept!

How did it evolve to its current form? Googling back to previous editions there was no mention of special beers.

‘Razernij’ started out in the year 2000 when a bunch of young guys got fed up with going to boring mainstream festivities and started throwing rock parties! As the parties grew bigger year after year the idea rose to start organising gigs. So that’s what we did. We succeeded in getting international bands such as No Fun At All, Dog Eat Dog and CJ Ramone. Being based in Rumst we teamed up with another local organization called ‘Rumstse Volksfeesten’ in 2015. They have been organizing a local festival for more than 50 years with Belgian bands and singers. All profits go to local charity so we decide to join forces.

The origin of the name ‘Razernij’ (‘rage’ in English) lies in the name of the small township ‘Lazernij’ (a part of Rumst) where the first ever party was held.

What should we look out for at this year’s edition?

The obvious answer is Lagwagon. Lagwagon is cult. Lagwagon is punk rock from Goleta, California. You may credit them for being part of the worldwide skate-punk breakthrough in the ‘90s. The band never went for mainstream success, but did gain a cult following and helped reshape the punk scene with notable bands such as Green Day and Rancid. Lagwagon keep rocking after so many years! Don’t be amazed to be in the middle of a huge mosh pit! Perhaps when they play “Beer Goggles”.

Belgian Asociality will bring back tons of memories and big smiles. Some say they have turned into their iconic Bompa Punk character but we can ensure you they still have loads of energy to smack you around with sharp edged lyrics and basic but oh so effective riffs and drums. Strange things usually happen during their set but what you should look out for is a guest appearance from one of the brewers. He has a past in a punk-rock band, including worldwide touring, and BA is one of the heroes from his youth. Should be a gusher!

The next band up already has a Razernij reputation since the opened for Dog Eat Dog in 2015. F.O.D. is the torchbearer of the Belgian punk rock scene these days. Their live reputation is legendary with their catchy melodies and vocal harmonies. If NOFX is a tomato, Green Day an onion, Blink 182 the lettuce, Bad Religion a cucumber, then F.O.D. is a very good f&%*g salad. Make sure to ‘Carry on’ with these guys!

“Does the world really need another pop-punk band? Probably not, but we started one anyway. We are called For I Am… nice to meet you!”. If a band uses these lines as an intro, you know they just like to play the music they enjoy themselves. This female fronted band will make you dance your socks off!

On the beer side, we’ve looked for and found a series of punk – rock ‘n’ roll brewers. DOK Brewing Co, the new city brewery from Ghent, will be a scoop. We are the first festival they agreed to participate in and we will witness the launch of their first brews. Behind DOK Brewing Co are Dimitri Messiaen (Ministry of Belgian Beer, Pils 13), Janos De Baets (Hedonis Ambachtsbier) and Daniella Provost (zythologist/beersommelier, L’Arogante) All together that is tons of skills that will guaranteed produce great outcome!

Jef from Hof Ten Dormael is a huge fan of heavy music. We could not deliver on his wish for thrash metal but he will serve some thrashing beers instead! Expect super farmhouse beers from the brewery behind Leuven Innovation Beer Festival.

Our northern neighbours send us Oproer. Oproer (riot in Dutch) is the result of the merger of Rooie Dop and Ruig. These do-it-yourself guys blessed with a fuck-the-system punk-attitude serve brews with unholy names like Black Flag en Refuse Resist. No revolution without oproer!

From the beautiful Manerbio in the province of Brescia in Italy comes No Tomorrow craft beer. Formerly known as Pogue Mahone they dig deep into the hop and music well resulting in brews such as Led’s Hop and Black Source.

On the borders of Lake Geneva, where the origin of ‘Smoke on the Water’ lies, you can find Cote West Brewing. Brewer Keith originates from California but is now living in a suburb of Lausanne, called La Côte. Cote West, you got it? He will bring us Californication, Hoppy Kiss and Explicit Content.

Freigeist Bierkultur was originally conceived as the higher-capacity offshoot of Cologne’s revolutionary and extremely tiny brewpub, Braustelle. Led by co-founder and historical beer fanatic Sebastian Sauer, the “Free Spirit” brewery challenges the stylistic conservatism that prevails in Germany by reviving and updating unique, regional beer styles, many of which disappeared only a few decades ago. Think Abraxxxas, Geisterzug or Mexican Standoff Stout…

We also welcome a Portuguese beer stand including following breweries: LX, Velhaca, Oitava Colina, Against The Tide, TREVO and MAG8. Insiders claim the source of the unearthly powers of Christiano Ronaldo is to be found in their barley brews. With names like Tovarisch, Lucky #7, Rank Outsider, SeteAis, Sunday Bloody Sunday and Russian Mafia this could very well be true!

How do you approach collecting a line-up (both beer and bands) for this unique event?

We always start of with the headliner. Since we’re a small festival this tends to be quite hard. Most bands with a reputation aim to be booked at large festivals so they are a bit reluctant. However, the positive reactions of the bands who played at Razernij and of their management helped us to built credibility and a reputation. Approaching breweries is a more organic process. The names, logos or labels that you associate with punk/rock/metal songs or bands arouse your interest. You start talking with the brewers at a beer festival, tap take-over or brewery/pub visit and if you hear and see what you like, you invite them. Our beer master Kris also tends to travel a lot for work. Every spare moment he is checking out the local beer scene and so it happens you bump into some great rock ‘n’ roll breweries.

What bands and breweries are on your wish list for future editions?

On the music side, there is Life of Agony. We had a deal with them last year but an exclusivity contract with Alcatraz necked us. Our goal is to unite LOA with their fellow NYHC buddies from Pro-Pain. Bandleader Gary Meskil is a huge craft beer fan so that would make a perfect match.

If we can make that work, we will also try to get some US brewers over. Calusa Brewing from Sarasota is still to be discovered in Europe. Angry Chair from Tampa is another top rated target. Closer to home we are in touch with Enigma and Hellegat. From the rest of Europe we are looking at Laugar (couldn’t make it this year), Drunken Bros (ES), Nova Runda (HR), La P’tite Maiz’ (FR), Anarchy Brewing (ENG), De Kromme Haring (NL) en Black Metal Brewery (SCO) but it could well be we accidentally bump in some other rock ‘n’ roll brewers…

Will there ever be a special festival edition beer? If yes, what style would you want it to be?

You mean a Razernij beer? The answer is no, at least for now. However rumour has it that Cote West Brewing is working on a special batch for this year’s edition. Keith is such a big Lagwagon fan

If you’re into poison, make sure to get your dose at Razernij, Beerdrinkers & Hellraisers 2018. Mention “Pick Your Poison” at the entrance and we’ll add up an extra jeton to your tasting glass!

Drink, pogo, mosh, fun, chat with a brewer, it’s all just normal at our festival. See you there!

Thank you so much for the interview and the nice treat for our readers! See you there, we can’t wait! 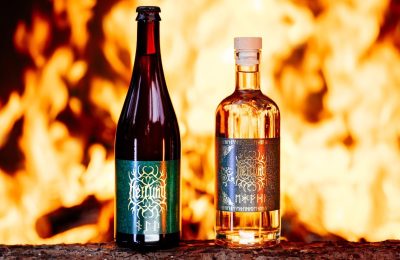 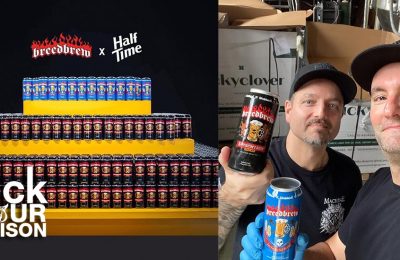