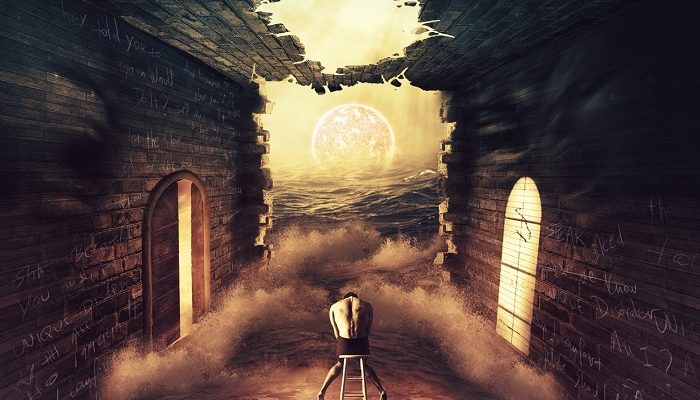 The Greek progressive/alternative metal band Poem is a band I’m not familiar with, but since I’m into Greek metal music I wanted to hear what this band brings with their third album ‘Unique’, which will be available as a Digipack CD. The album cover suits the title perfectly from my point of view. Unique people are often misunderstood which leads to moments of loneliness and insecurity. I think these feelings are beautifully depicted here. Poem consists of Giorgos Prokopiou (vocals, guitars), Laurence Bergström (lead guitars), Takis Fitos (bass) and Stavros Rigos (drums), who says the following:

From the beginning of the album you pop up the volume a little bit more… a bit more… and more! Behind every song lies a powerful story.

The first song ‘False Morality’ brings strong parts alternately with soft parts which gives you the feeling as if you were floating. Giorgos has a varied voice which he optimally uses from the beginning and the lyrics are perfect for a first song. While the music gave me the feeling this was more an intro of the second song ‘My Own Disorder’ with a strong rhythm through the entire song which is the real beginning of the album for me. And I think that’s exactly what Poem did, ‘Unique’ contains 7 songs and ‘False Morality’ is the shortest on this album, so it can certainly be a long intro in the form of a song.

The music is as important as the vocals in this album. There are songs in which the music supports the vocals, but in other songs it is the other way around. Musically the guitars are the most striking, Giorgos and Laurence are well adjusted to each other and you can hear that through the entire album. You can hear the best example in the title track ‘Unique’.

Next to the broad vocal range of Giorgos, varied rhythms and great guitar work define this album. ‘Unique’ is not a heavy album, it’s an album where you can lean back in your chair and just enjoy it, or as Giorgos Prokopiou describes it:

Close your eyes and let it flow.