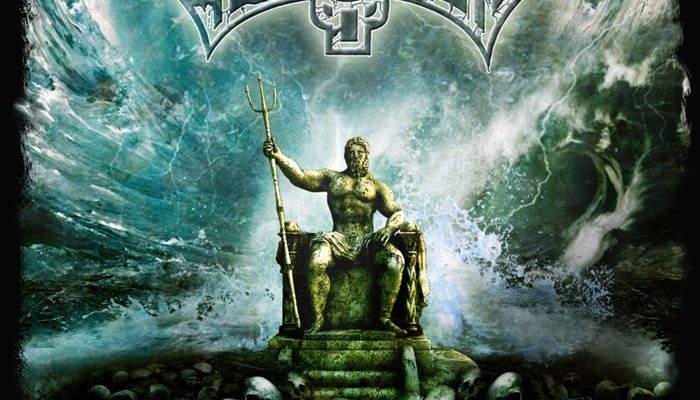 Poseydon is a Belgian death/thrash metal band that has been around for a while already. They started in the nineties, had a bit of a hiatus and seemed to pick up things again in 2006. After they found Christoph Lamsens as their new vocalist, the band around Alain De Block (Everglow, Astovidatu) got the ball rolling again. Now they’ve finally released their full release Masterpiece. Time for a closer look at their work.

When I got the CD in my hands, it looked like I was in for a treat. The cover art of Masterpiece portrays what looks like the Greek god Poseydon sitting on a throne in front of a perfect storm, on top of a bunch of skulls. Combined with the band’s name, it seemed like they were going into the ancient Greeks direction. I’ve found that (death) metal bands with a certain theme can be really interesting. You have Amon Amarth with their Viking themes, Nile going the Egyptian direction in pharaoh times and so on.

In that I got a little bit disappointed and confused, cause lyrically they’re sticking to themes that are more relevant for this time period. Like in Classified they seem to handle hidden crimes done by governments. And in Masterpiece they put themselves in the mind of a serial killer and what he sees as his “masterpieces”. The lyrics are actually not too bad, but with the band name and the overall styling of the album I really expected something else. The closest they got to that, is in The Tempest. Here they’re singing about withstanding an all-devouring storm that is hanging above our heads and could perfectly work in the “Poseydon” theme.

Now, about the actual music… If there’s one thing certain, it’s that they’re all mastering their instruments. The mix of death and thrash sounds damn heavy. The drums are keeping up a deadly pace, the bass brings that perfect depth to it and the guitars have besides strong riffs also their moment to shine in blistering pieces. Besides that the vocals really fit this style of music, nothing new or special, but a perfect fit. It all sounds really good, but somehow it didn’t leave me as impressed as their music should have. The overall mixing sounds a bit muffled to me, I think the music could’ve packed a bigger punch with a more clear sound. I’m really curious to see them live, I hope they can really hit the doubts out of me!

For fans of death/thrash metal, this could be an interesting discovery. Poseydon definitely has the potential to become a big band still in this style. Masterpiece could’ve used some more work maybe to be an absolutely perfect creation, but it’s still interesting enough to get you going. 7/10 for this one.