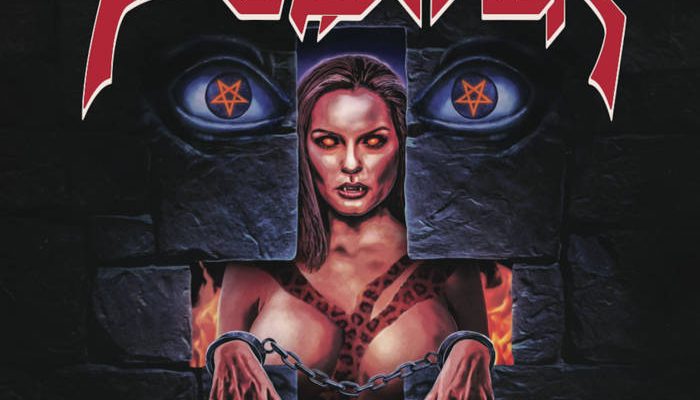 Alright folks lets gear up, now is the time to wear your favorite heavy metal band shirt, black jeans, and gauntlet, metallic ornaments, leather jacket with band patches and army boots. For it’s time to embrace our heavy metal fashion and raise our fists high and shout out loud and sing some rebellious anthems. U.S. heavy metal band Pounder returns with an invigorating debut album, founded in 2016 this super group is consist of members who have a musical background in death metal music. The current line-up brings Matt Harvey (Gruesome, Exhumed) on vocals/guitars, Alejandro Corredo (Nausea, ex-Vallenfyre) on bass guitar, and Tom Draper (Carcass) on lead guitar. And together they share their tribute and devotion to the classic sound of the 80’s heavy metal music. With one E.P. , demo and a single, the debut full-length Uncivilized is a rocking album that radiates with powerful tunes of heavy guitars and rhythmic vocals. That will remind you of the early days of NWOBHM, call them heavy metal or speed metal but Pounder can draw out all of your passion and energy and make you rock out, well possible with your cock out!

It’s quite fascinating to see members from death metal bands who can actually play heavy metal music. Well, Pounder does it with style, attitude and passion that will make you feel nostalgic.
The three piece display an individual flair when it comes to music, and that’s through the quality of performance. And that’s by boosting the eight new songs with excellent guitar licks, rhythm and electrifying vibes. The 80’s throwback is clearly manifested on the album cover, and it’s hard to specify which of the bands that have influenced Pounder. Though the dominant influences are from Iron Maiden, Judas Priest and other influences from speed metal as well.

The album begins with Fuck off and Die which is maneuvered by stunning guitar work steered with pacing drum blows, yet with more tamed aggression the ear worm melodies surpasses the overall tune of the first track, where later on the song developed into a faster tempo. Uncivilized is approached with a spectacular songwriting and individual skills therefore you can feel the 80’s heavy metal sounds being conveyed with the power of the guitar riffs. The second track kicks off with excellent guitar licks and percussion, and this actually explains the musicianship in which the band attempt to achieve. While the blazing riffs diffuse along with Matt Harvey’s vocals, this track brings Iron Maiden to my mind. There are rumbling bass lines infused with swiftly solos and pacing drums all arranged and assembled.

Pounder channels the classic style of NWOBHM, the influences are more comprehensive than focusing on a certain style. The guitar melodies are paired with rhythmic vocals of Matt Harvey,  Uncivilized is very organic album filled with melodies and rocking tunes. The guitar tonal is charged with the heavy riffs of retro metal which are encapsulated with fiery anthems of heavy metal. In the past few years we’ve seen many new bands which express their love to heavy metal/NWOBHM music. The newer wave of such bands like Portrait, Ambush, Cauldron , RAM, Hell, Air Raid and many more all capture the ethos of traditional heavy metal sound.

Next is Red Hot Leather which opens with catchy riffs, bouncing with compelling melodies and pleasing solos. The biggest surprise is that trio have arranged some unexpected ballads Long Time No Love is a pure ballad that has some heavy tunes of a rocking ethos. This is one of the highlights on the debut, and it’s carried along with fabulous guitar talents. With other tracks like We Want the Night, Pounder batters again with previous style. Although the level of pounding and the propelling force is more controlled. And similarly the next track The Mists of Time sounds a bit heavier than the previous track, the musical style plunges deep into heavy sections triggered with power chords. And applied with effective guitar riffs and percussion where the fascinating solos prevail.

Answer The Call is another classic ballad tempered with melodic chords and has a slow tempo overall, Matt Harvey’s vocals are toned down here. But nevertheless this isn’t all slow the track is adjusted with extended solos and I can’t tell you how many great solos are on this album. The closing track The Evil One develops into traditional sound of speed/heavy metal, and later proceeds into mid tempo that is built on riffs and pacing drums.

Pounder’s debut full-length album is quite refreshing and the band has managed to bring some energizing tunes without emulating other bands. Uncivilized is one of the highlights of 2019 brought by fine quality from these musicians who share their passion for heavy metal and beyond! 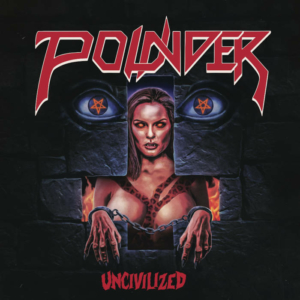