After very hot and successful editions of Graspop and Hellfest it’s time to turn our heads to the Dynamo Metalfest at Eindhoven on the 15th of July. The elderly will for sure know the legendary Dynamo Open Air festival from the past which was always an adventure while it opened up a lot of chances to bands, remembering the early years of Machine Head, Pantera, etc … The Dynamo Metalfest isn’t as big (yet) as it ancestor but their roots are the same, youth center Dynamo at Eindhoven.  This year they go for a revival of the late 80’s thrash era, with some nice added extra’s. 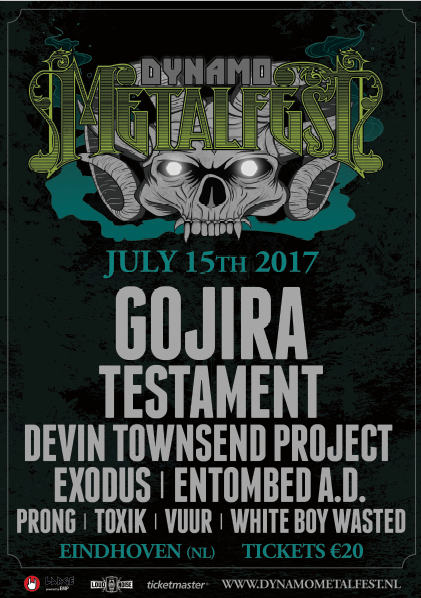 First up is the dutch speedrockband White Boy Wasted who won the Metal Battle, it will for sure be a party as playing in your hometown adds always something extra to the show. Vuur, the new progressive band with front woman Anneke Van Giersbergen is here to show what is all the fuzz about. With the stuff that I already heard from them, I am quite sure the audience will give them a big cuddle. Toxik, the 80’s thrash band who brought us all time classic albums like World Circus and Think This , will bring a lot of memories back, for those who don’t know them, Belgian Evil Invaders are quite close in sound to them. Entombed A.D., the follow-up to Entombed, brings us death ‘n roll like hell. Tommy Victor and his incredible tight rhythm section, also known as Prong, will get the groove back in mixed with the thrashy elements as we know them. And another big name follows, Exodus: another survivor of the 80’s thrash era. Next up, is our Canadian crazy friend Devin Townsend who’s getting more popular and popular these days, which he deserves as hell, check him out for sure, you will have a good laugh and we are sure that Anneke Van Giersbergen will sing along with him. Save the best for last and that’s what Dynamo Metalfest does , thrash giants Testament are here to knock you down, but hey it’s not over yet. We still have Gojira, the French progressive, thrash or whatever you want to call it, are going to tear the place down.

How much will that cost me ?

Believe it or not, all these bands together for 20 € !!! Yeah, you read this correctly, only 20 €! Normally you would pay this or more for each band separately. Of course there are some added service costs (2,5 €). Let’s be honest, for this price, these bands, you must be joking.

The festival takes place at Ijssportcentrum in Eindhoven (also known as Kunstijsbaan ) at the Antoon Coolen laan in the south of Eindhoven. Look here for a map of the Kunstijsbaan. As there is a parking in the neighbourhood you can go with the car but it’s not recommended as it is expected there will be a lot of people. You can come also by train and take the normal bus (lines 171,172 or 7)  to the Ijssportbaan or you take for 4 € (retour ticket) the special busses that drive from the station to the festival site.

Drinks cost 2.5 € and are paid with tokens which you can buy on the festival site or in advance, in a bunch of 40, there are also a lot of possibilities to eat with enough alternatives for our vegan friends, don’t really know if you can get a ‘broodje kroket’ but it looks like there might be some interesting BBQ and food truck stuff to be found… If you’re wondering if it’ll be Heineken that you’ll have to drink, don’t worry: last year they launched their own “festival beer” called Langharig Tuig (roughly translated as “longhaired scum”), a refreshing hoppy Weizen beer which is the result of a collaboration with the local brew pub Van Moll. You’ll be able to read a review about the beer in our column Pick Your Poison soon! And besides that, the “HappyFace Beers” will be represented there too: badass brews made by metal fans for metal fans, be sure to taste some…

This year Dynamo Metal Fest introduces a deposit money system for the drink cups. A system that should be quite familiar to people who went to certain festivals in other countries like Rock Hard, Wacken Open Air or Tuska Open Air. When you get your drink you pay 2 coins: 1 for the drink and 1 for the cup. Don’t throw away the cup ’cause with every new drink you get, you hand in the cup together with 1 coin for the new drink. At the end of the festival you can exchange your cup for a coin and the coins you still have in your pockets for money. Before you return your cup, have a good look though. There are a limited amount of cups going around with the line-up of Dynamo Open Air 2017 printed on it. You definitely can take those home: a collector’s item!

The festival itself opens at 11 am. Check the time schedule blow to plan when you need to be there!

Buy your ticket here to join this hell of a party. If you need more information on it you can always visit the website Dynamo Metalfest 2017.
Or if you simply need more convincing still, check out the aftermovie of last year’s edition! 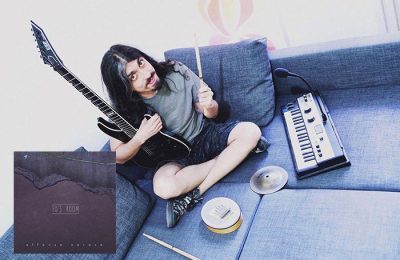 PREMIERE: Alfonso Corace welcomes the world to his room 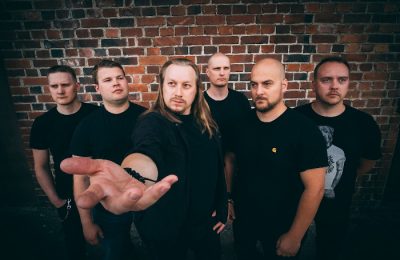 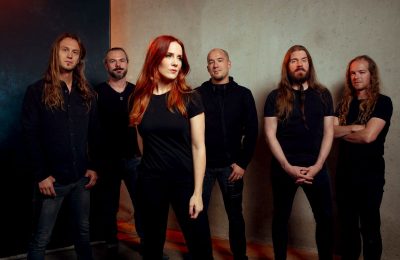